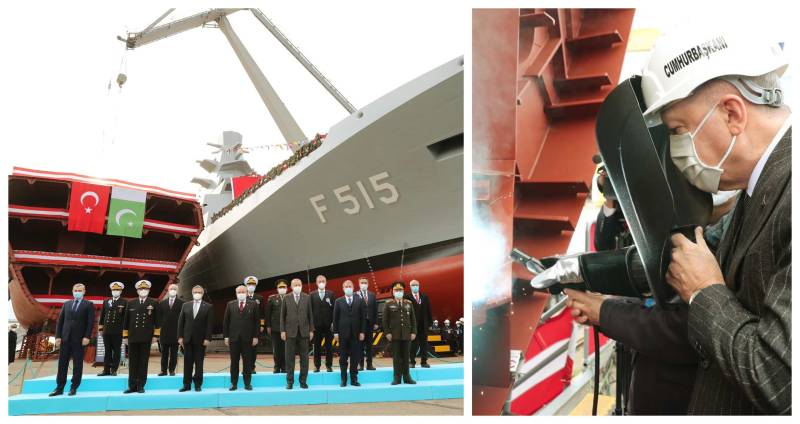 ISTANBUL/ISLAMABAD – Turkish President Recep Tayyip Erdogan on Saturday launched the welding of the third ship to be constructed for Pakistan Naval forces under the MILGEM project.

Erdogan has underscored that the defence collaboration for the construction of warships is another milestone in Pak-Turkish defence ties.

Ambassador of Pakistan in Turkey Muhammad Syrus Sajjad Qazi also accompanied the Turkish President at the ground-breaking of the third of the four corvettes for Pakistan Navy.

Pakistan is our brotherly country with whom Turkey enjoys admirable relations. Both sides are living in difficult geographies and both countries are facing similar challenges, Turkish premier added.

ISLAMABAD – Chief of the Air Staff Air Chief Marshal Mujahid Anwar Khan, who is on a 4-day official visit to ...

He also highlighted that Istanbul would continue to support friendly and allied countries in the defence field.

Erdogan, 66, while referring to his last year's Pakistan visit mentioned the two countries signed a Strategic Economic Framework that would provide the necessary institutional framework to further enhance bilateral ties.

Four of the corvettes are being built under the MILGEM project, two in Turkey and two in Pakistan. The project embodies the transfer of technology as well as upgrade of Karachi Shipyard. Addition of the stealthy frigates to the Pakistan Navy would further enlarge its defence capabilities.