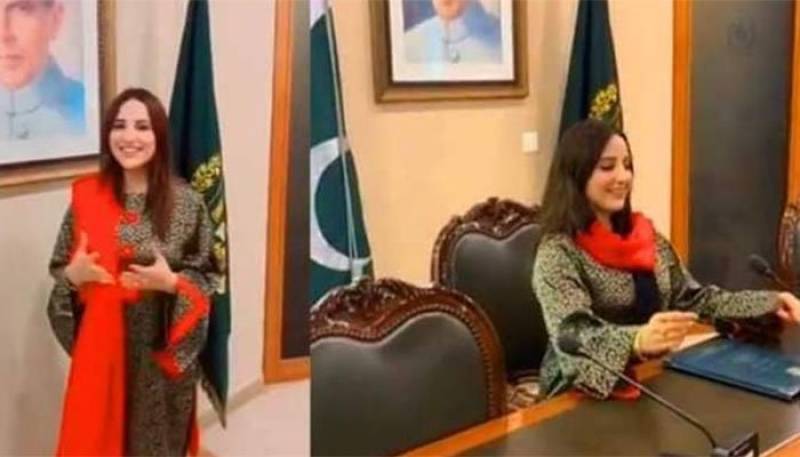 LAHORE - TikTok star Hareem Shah, who has been in highlight for making a TikTok video inside committee room at the Foreign Office, has spoken about her viral incident.

While having a talk with 'Dunya TV' officials, Hareem expressed that she was not stopped from taking pictures or making a video inside the FO. “There were no restrictions nor anything was said to me regarding it”, she added.

She went on to say that everyone gets monitored by the CCTV when they go somewhere and so would the FO have done when I was there. “I casually made a video there and no authority said anything to me or even called me about it”.

TikTok star asserted that a man was standing in the room who helped her in making video and taking pictures upon asking.

Hareem Shah said that she would have thought about it if it was a sin or even merely wrong to take pictures there. “My intentions were not wrong and I would not have done it if deemed inappropriate to me. I think it is not a big deal”, she added.

Earlier, questions have been raised over TikTok star Hareem Shah’s video which she recorded inside the Foreign (FO), as reported by Dunya News.

According to details, Hareem Shah uploaded a video on her TikTok account in which she can be seen inside the committee room at the Foreign Office.

The FO has taken notice of the incident and officials are interrogating the matter as to how the TikTok star reached the sensitive area where top leadership of the country holds meetings with heads of other states.

The FO sources revealed that CCTV footages are being examined to determine the responsible persons behind permitting Hareem Shah to go inside the committee room.

Furthermore, entry logbook is also being checked and the authorities are figuring out whether the TikTok star visited other places at the Foreign Office.