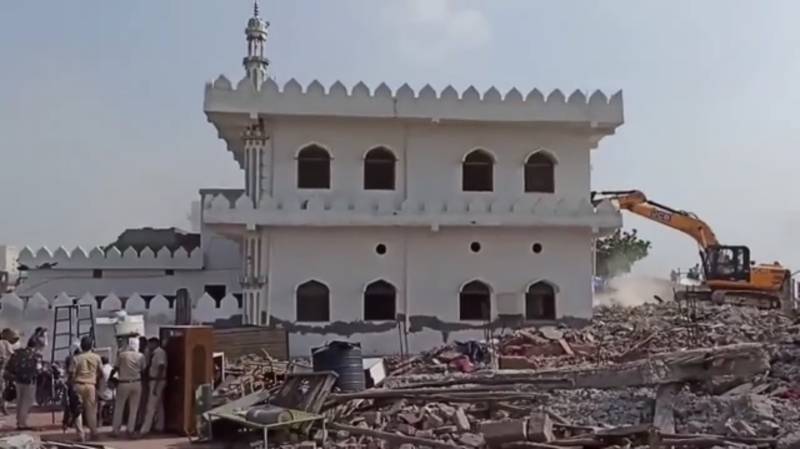 ISLAMABAD – Pakistan has condemned the unjust demolition of the historical Bilal mosque in the Indian state of Haryana and demanded the international community and human rights organizations to look into the matter.

In another attack on India's Muslim minority, the ancient mosque was razed to the ground in light of the Indian Supreme Court’s orders to demolish the encroachments in Faridabad.

A statement issued by the Foreign Office Spokesperson Asim Iftikhar Ahmad said “The Hindutva-driven BJP-RSS combines perpetual targeting of Muslims and their places of worship, which is an indelible blot on the so-called largest democracy”.

FO pointed out that “the targeting of Muslims, their religious places, and cultural heritage continue unabated in Indian Illegally Occupied Jammu and Kashmir and in India”. Pakistan urged the international community, particularly the United Nations, to hold India accountable for its injustices towards Muslims.

The statement further added that “Muslims and their places of worship were attacked with state complicity during anti-Muslim pogroms in Gujarat in 2002 and in Delhi in February 2020, without there being any judicial accountability”.

The recent incident is followed by the 2019 incident, when India’s top court awarded the Ayodhya to Hindus, allowing a temple to be built where once the Babri Masjid stood. A Five-judge bench, headed by the chief justice of India, Ranjan Gogoi announced the verdict.

NEW DELHI – In another gruesome incident in the Indian state of Uttar Pradesh, a group of Hindu extremists ...

The dispute over the 2.77-acre plot turned violent in 1992, when a Hindu nationalist’s mob razed the mosque which sparked communal riots across the neighboring country, leaving thousands dead.