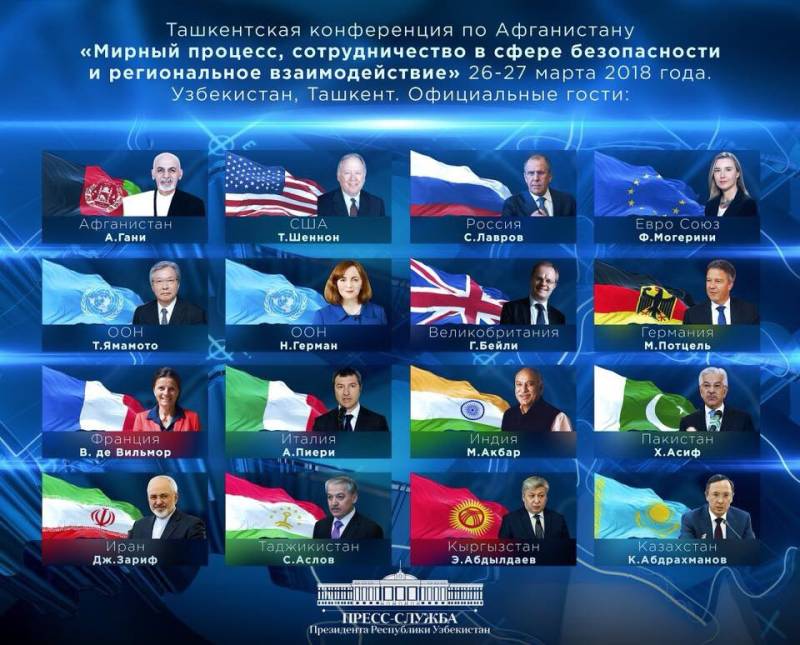 TASHKENT - Tashkent is ready to greet diplomats from 20 plus countries to attend Tashkent Conference on Afghanistan to be held on March 26 – 27 (Monday-Tuesday).

Afghan Taliban reportedly claim that neither Uzbekistan nor Afghanistan has invited them to Tashkent Conference while Afghan media claims that invitation was sent to Taliban.

Salaam Times of Afghanistan while citing news reports from Uzbekistan stated that Uzbekistan Foreign Ministry on March 12 stated that “Taliban representatives have not applied to attend the conference.

The United States is reportedly sending Under Secretary level official to the participant while Russia is sending Foreign Minister Lavrov.

According to available information, Thomas Alfred Shannon who is an American diplomat and the current Under Secretary of State for Political Affairs will lead the US delegation to the Tashkent Conference on Afghanistan, hosted by the government of Uzbekistan.

Russian Foreign Minister Sergey Lavrov will lead Russian delegation to Tashkent and will hold several bilateral meetings on the sidelines of the international conference.

China is reportedly sending Vice Foreign Minister Li Baodong. He is a career diplomat who served as the Permanent Representative of the People’s Republic of China to the United Nations from 2010 to 2013.

European Union will be represented by High Representative for Foreign Affairs and Security Policy/Vice-President of the European Commission, Federica Mogherini.

The last conference about Afghanistan was hosted by Tashkent in July 1999 which was called 6+2 Contact Group Conference to review Afghan Civil War. The group included China, Iran, Pakistan, Tajikistan, Turkmenistan, Uzbekistan while 2 plus were and the United States and Russia.

Topics for discussion at the conference include matters relating to peace and reconciliation, counter-terrorism and counter-narcotics, as well as regional cooperation. All of these themes feature strongly in the EU’s own Afghanistan Strategy (Joint Communication; Council Conclusions), which was adopted in October 2017, as well as the EU-Afghanistan Cooperation Agreement on Partnership and Development, which has been provisionally applied since 1 December 2017.