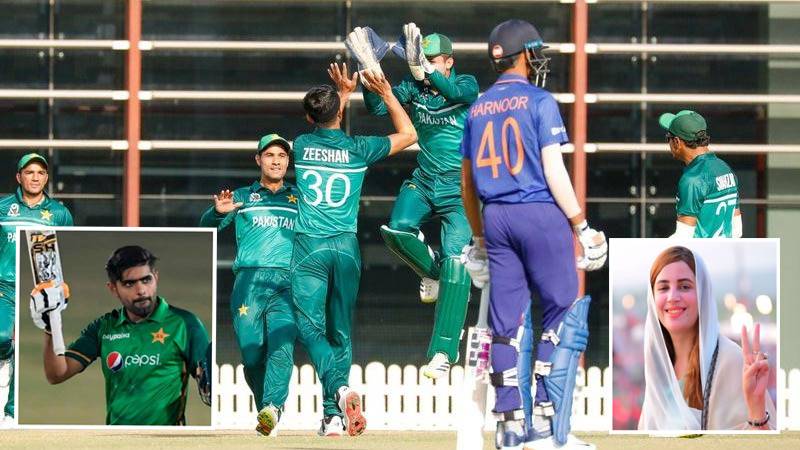 LAHORE – Pakistan’s national team players, board officials, and politicians expressed their delight and congratulated the U19 team for its recent feat against India in the ongoing U19 Asia Cup.

The Pakistan Cricket Board (PCB) Chairman Ramiz Raja and the skipper Babar Azam have felicitated the Pakistan U19 side, after their win over India on Saturday clash.

Taking to microblogging app, Pakistani star player Babar Azam lauded the Pakistan side for playing a wonderful game against arch-rival. He also urged the youngsters to keep performing like this and continue to make all of us proud.

Well done boys, keep performing like this and continue to make all of us proud. Praying for your more successes in cricket.🇵🇰 https://t.co/fKMeRsb3Q4

“Congratulations to the U19 boys on an impressive win against India. All the best for the Asia Cup and the World Cup!”, Shahid Afridi wrote on Twitter.

Congratulations to the U19 boys on an impressive win against India. All the best for the Asia Cup and the World Cup!🇵🇰

The recent triumph of the U19 team also prompted politicians’ reactions. Minister of State for Climate Change Zartaj Gul congratulated the Pakistani team for defeating India in the U19 Asia Cup.

Gul specially mentioned Muhammed Shehzad, who won the Man of the Match award for showcasing the best game.

Pakistani U19 team defeated the neighboring country by two wickets, after a fascinating clash in Dubai. Muhammad Shahzad set the platform for Pakistan’s victory, with a solid knock of 81 runs off 105 balls.

Young paceman Zeeshan Zameer bagged a five-wicket haul, which restricted the other side. He said I was happy to play a key role in his team’s win.

DUBAI – Pakistan won the nail-biting game on the last ball against India in a match of the U-19 Asia Cup on ...

The win also helps Boys in Green to top the table in Group A, after two wins in as many games. Pakistan’s final group-stage match will be against United Arab Emirates (UAE) on December 27.