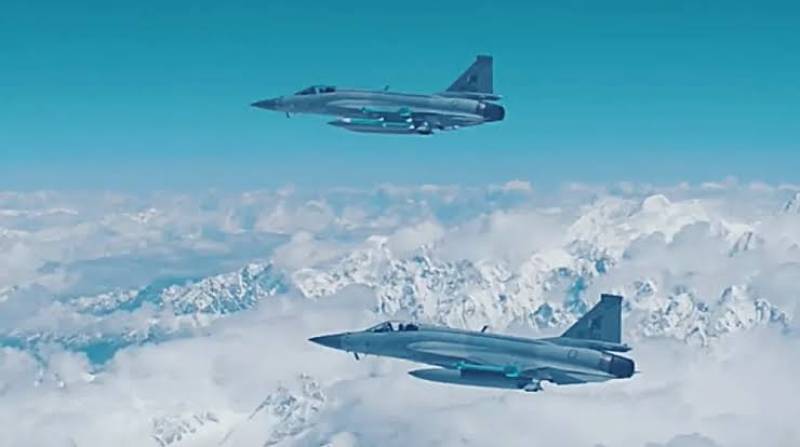 According to DG ISPR PAF were immediately scrambled who chased them away.

Indian aircrafts intruded from Muzafarabad sector. Facing timely and effective response from Pakistan Air Force released payload in haste while escaping which fell near Balakot. No casualties or damage.

According to Pakistani Military's spokesperson, IAF jets were unable to hit any target or do any damage. PAF had already been on high-alert for such an eventuality and there were reports of PAF conducting border patrol missions in light of Indian hostilities.

3: #Balakot most likely an escape route.

5: No specific target hit, no material or loss of life reported.

While escaping, the IAF jets released payload in haste which fell in an open area near Balakot without causing any damage.

The IAF jests intrusion across the Line of Control (LOC) in Muzafarabad Sector within Ajaz Jammu and Kashmir was three to four miles, the Pakistani Military spokesperson said.

Indian aircrafts’ intrusion across LOC in Muzafarabad Sector within AJ&K was 3-4 miles.Under forced hasty withdrawal aircrafts released payload which had free fall in open area. No infrastructure got hit, no casualties. Technical details and other important information to follow.

According to some local journalists, the location where the IAF aircrafts dropped payload appears to be an uninhabited forest of Jaba, in Mansehra district, located at 60km from LoC within Pakistan.

Local journalists tell @AJEnglish that location of Indian payload drop appears to be Jaba, an uninhabited forest area in Mansehra district located about 10km from border with Pakistan-administered Kashmir and 60km from LoC.

On the other hand, BBC reports that the IAF sources have denied the recent violation of the LoC, by saying that "Mirage fighters took off from Ambala air base and without crossing the international border bombed designated targets."

#IndianAirForce sources tell BBC that Mirage fighters took off from Ambala air base and without crossing the international border bombed designated targets. Whole exercise took 30 mins, all aircraft returned safely. Strike appears to have been on Balakot across LoC and not in KP

Pakistani security officials took to Twitter and said that "no targets were engaged by the Indian aircraft, the speed with which they entered and left Pak airspace, no target could be engaged." The Indian Aircraft remained in Pakistan's airspace 'practically for 30 seconds or less' they said.

“At roughly 1200 kph i.e., 667 knots you are supersonic. How can you drop weapons and engage target at this speed? Indians were in our airspace 'practically for 30 seconds or less'.”

While Pakistan is claiming that Indian jets failed to hit any target and scrambled in haste due to PAF's quick response, Indian media has been quick to jump the gun to claim some sort of victory over Pakistan. This violation of LoC is already being called Surgical Strike 2 in the Indian media, but it seems more like a information operation to placate their own public rather than a military strike. Indian public has been demanding some sort of action against Pakistan after Pulwama attack, which Indian media and govt had blamed on Pakistan.

It should be remembered that this is an election year in India and far-right Indian ruling party BJP and PM Naridar Modi want to maintain the 'strongman' image at all costs. Pakistan has been an important talking point in Indian elections and hatred for Pakistan attracts a lot of Indian votes.

DG ISPR shared proofs of Indian payloads that had fallen in empty areas due to their haste to scramble with PAF on their tails.

According to reports, Indian defence ministry is now saying it has no knowledge of any violation of Pakistani airspace by IAF aircraft.

India has deployed heavy artillery and forces on the Line of Control (LoC) after tensions flared up between Pakistan and India in wake of a suicide attack on Indian Army convoy by a Kashmiri youth.