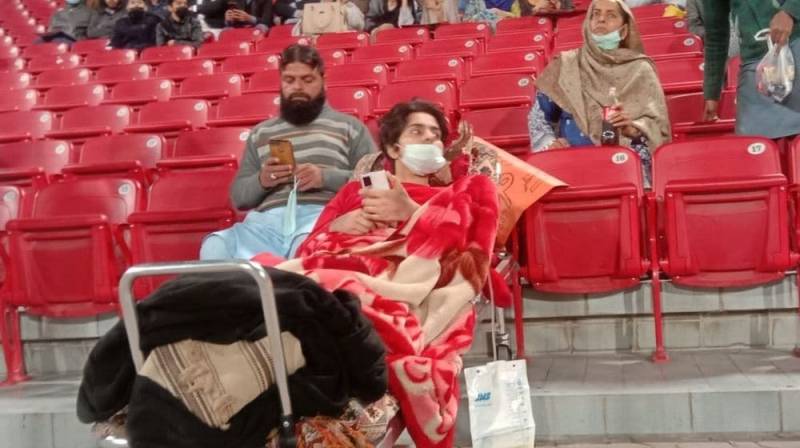 LAHORE – During the second eliminator at packed Lahore’s Gaddafi stadium where the vibes were overwhelmingly pro-Lahore, a bedridden fan of Afridi led squad came straight from the hospital to support his team as he watched the nail-biting encounter on a stretcher.

Sports fans around the globe have done a lot of things for the love of their favorite team or game and a similar incident occurred on Friday as a boy, Haider Ali, arrived on a stretcher to cheer up for the Afridi-led squad.

The disabled fan reportedly lost his leg in an accident around six years ago and has been bed-ridden since then. Reports in local media said Qalandars’ CEO, Atif Rana made the arrangements for Haider to attend the match.

The parents of the boy told a local news outlet that Haider has been a big fan of cricket since childhood. The ailing boy speaking on the occasion said he rooted for Qalanders as they are his favorite team while he picked star batsman Fakhar Zaman as his favorite player.

CEO Lahore Qalader Atif Rana said that he promised to provide medical assistance to Haider for his love for the game. “I am delighted he arrived at the stadium today and cheered for Qalandars, ” he said.

Meanwhile, spokesperson Punjab government Hassan Kahwar also interacted with the differently-able fan and promised to help him with his medical issues.

LAHORE – Lahore Qalandars handed a 6-run defeat to Islamabad United in a thrilling encounter in the Eliminator ...

Qalandars on Friday handed a 6-run defeat to Islamabad United in a thrilling encounter and have now reached the final of the tournament.