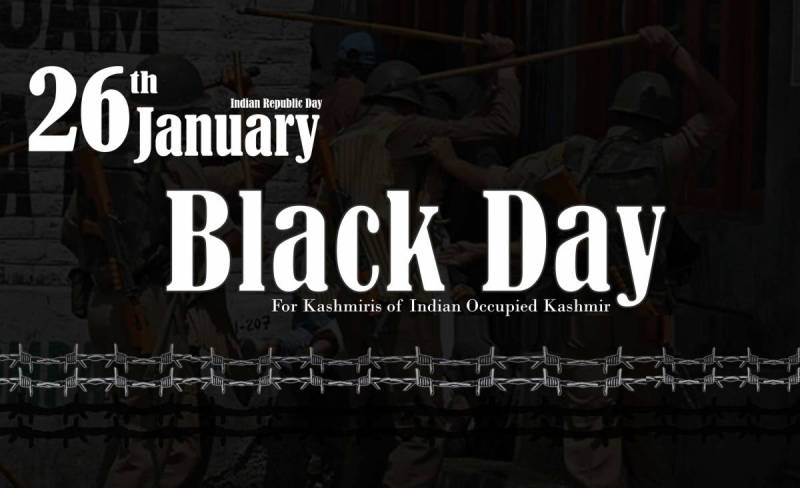 SRINAGAR – Kashmiris on both sides and all over the world are observing the Indian Republic Day as Black Day today to draw the world’s attention towards the unlawful and forcible occupation of Jammu and Kashmir.

Report of Kashmir Media Service said posters appeared across Srinagar and other areas of the territory appealing to the people to observe the Indian Republic Day as Black Day.

The posters displayed said if India believed in democracy, it would have not denied the Kashmiris their right to self-determination, and it would not take steps for changing the demography of the territory.

January 26 aims to apprise the world of the continued brutalities and custodial killing of innocent people and the unabated massive violations of human rights by Indian occupying forces in the caged valley.

The day is meant to remember when the Constitution of India came into effect on January 26, 1950.

In the occupied territory a complete strike will be observed, anti-India protests, and rallies will be carried out in parts of the world.

Meanwhile, India’s Republic Day celebrations have been marked by a security clampdown while authorities also snapped internet services and thousands of soldiers patrolled the streets.

SRINAGAR – Hurriyat leaders and Kashmiris slammed BJP led government for putting IIOJK up for sale as a real ...

In 2019, Modi led Hindu nationalist government scrapped the special status of Indian occupied Kashmir and imposed a curfew and communication blackout to suppress the dissent against the controversial move.

ISLAMABAD – Pakistan's Foreign Minister Shah Mahmood Qureshi has reminded the United Nations of its promise of ...