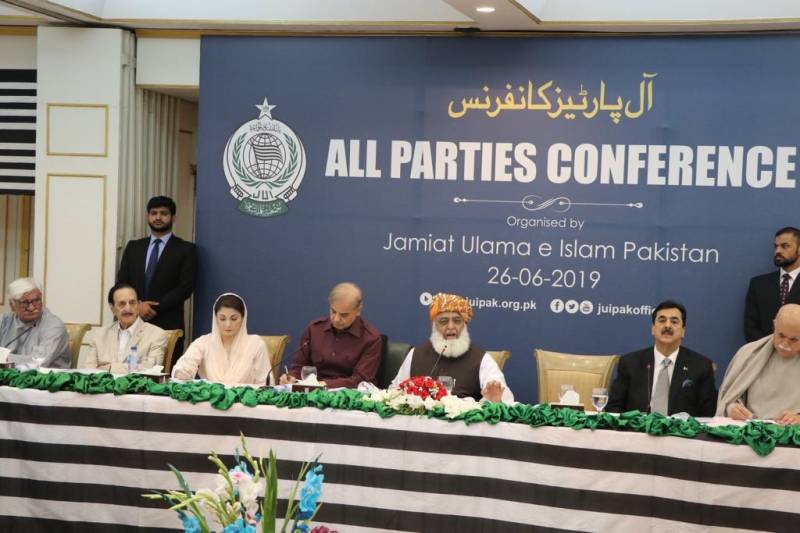 ISLAMABAD - The Jamiat Ulema-e-Islam (Fazl) chief Maulana Fazl ur Rehman told newsmen on Wednesday that a mass contact movement would be initiated besides protest inside and outside the parliament against the ruling Pakistan Tehreek-e-Insaf.

Addressing a press conference after multi-party conference of opposition parties, the JUI-F chief expressed that a mass contact movement in all four provinces will be launched.

The JUI-F leader shared that Senate Chairman Sadiq Sanjrani would be replaced through a constitutional procedure.

The former lawmaker detailed that a steering committee comprising members from all parties would be mandated to name a joint candidate.

"The committee will be called Rehbar committee, it will implement the APC decisions," he said.

The members have decided to mark July 25 as black day to register protest against alleged rigging in the last election, Fazl outlined.

The JUI-F leader said that the participants of the meeting demand issuance of production order for two arrested legislators hailing from Waziristan, adding that the opposition parties have called for legislation on enforced disappearances; Fazl was referring to Mohsin Dawar and Ali Wazir.

"The missing persons must be presented before the courts," he said.

Fazl elaborated that the conference members condemn measures being taken against parliamentary democracy and 18th amendment, adding that the opposition members have decided to resign in protest from the parliamentary committee constituted to probe rigging allegations.

The JUI-F said that the participants of the meeting stressed on establishing civil supremacy in the country.