Indian aggression in occupied Kashmir continued unabated even on Eid 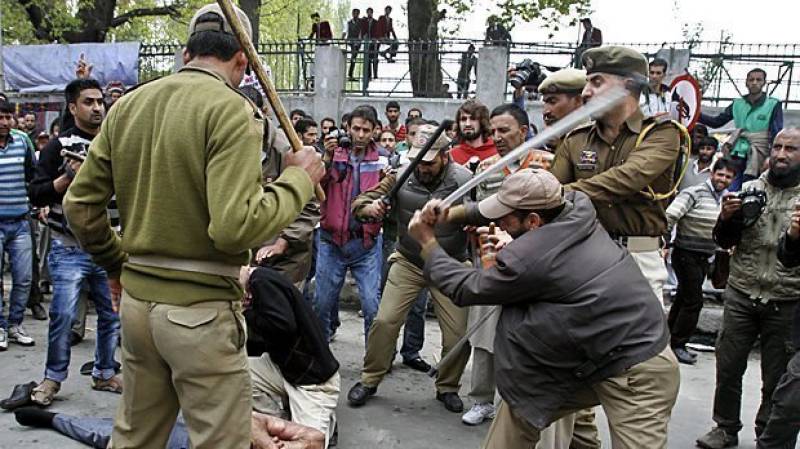 ISLAMABAD – The Muslims of the Indian Occupied Jammu and Kashmir (IOJK) celebrated Eid-ul-Fitr while continuing to face the inhumane siege by the Indian occupation forces who erected blockades to disallow Eid prayer congregations and arrested thousands of the residents for resisting the move.

According to the reports received here from the IOJK, the Indian forces intensified the lockdown ahead of Eid prayer and heavily deployed the armed personnel to intercept the Muslims from Eid prayers as well as the anti-Indian protests.

The Kashmiri Muslims had also been facing the similar restrictions throughout the holy Ramazan . During the holy month, the Indian forces cordoned off 472 localities and martyred more than 25 Kashmiris during the search operations and injured 249 besides arresting 163 freedom fighters.

As the brave Kashmir people raised the slogans against the Indian oppression while defying the Indian aggression on Eid day in Srinagar, Islamabad, Shopian and Budgam, the Indian forces baton charged the people and during the resistance, hundreds of the people sustained injuries.

The occupation forces turned the territory into a prison and the residents were disallowed to leave their homes even for Eid shopping.

In the name of Eid security plan, the security forces illegally house arrested thousands of the people and also did not allow the permanent Kashmiris residing in different Indian cities for education or livelihood, to return to their homes to celebrate Eid.

The international observers and representatives of international media viewed that the Indian forces had been committing serious human rights violations since last seven decades to suppress the Kashmiris independent freedom movement.

After revoking the special status to the IOJK on August 5, last, the Narendra Modi’s regime had imposed the worst curfew and had been vehemently torturing the Kashmiri people. Even during the COVID-19 pandemic, the occupation forces were searching the houses and even destroyed 750 houses and shops in district Budgam. In Nowakodal, a Srinagar’s locality, the Indian forces exploded above 20 houses and looted the cash, jewelries and other valuables.

In a message on Eid, All Parties Hurriyat Conference (APHC) Chairman Syed Ali Gilani reiterated the resolve that Kashmiris would continue their movement till the they got their right to self-determination.

He appealed the people to stay united to foil the Indian designs to changing the Kashmir’s demography by converting the Muslim majority into minority.

Gilani asked the people not to accept those coming from other Indian areas as their tenant and desiring to settle in Kashmir.

He said the people should not even cooperate with the students from of other Indian cities as they could also be acting as Indian puppets to serve the Indian agenda in IOJK.

The APHC leader warned for facing their wrath if anyone conspired to strengthen the Indian plans in the territory.

United Nations Secretary General Antonio Guterres also expressed solidarity with the Kashmiri people struggling for their right to self-determination and rejected the Indian policies of bias and hatred against Muslims. He also urged all the parties to show restraint and mutual respect.

Syed Ali Gilani also urged all the member countries of Organization of Islamic Cooperation (OIC) to stand united against the racists and hateful speeches, reject the anti-Muslim prejudice and intolerant attitudes and promote the culture of harmony.