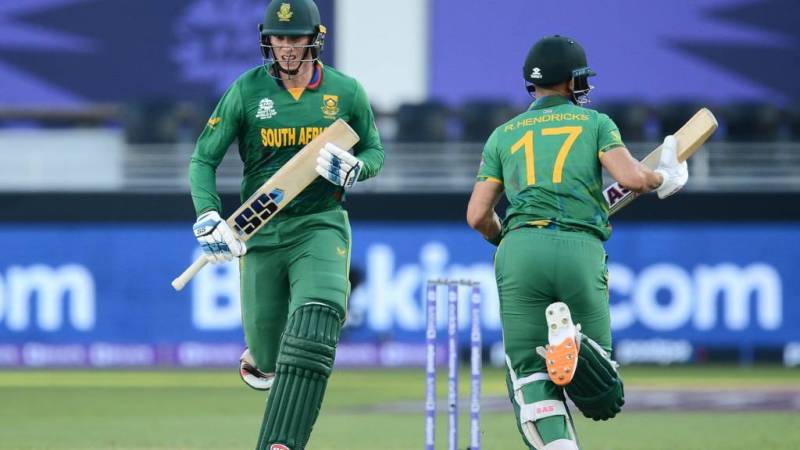 Chasing 144 for victory in the Super 12 contest, South Africa bounced back from an opening loss as Van der Dussen (43) and Markram (51) put on an unbeaten partnership of 83 to win with 10 balls to spare in Dubai.

Lewis hit 56 in West Indies' 143-8 but Men in Maroon suffered their second straight loss, having slumped to a heavy defeat by England in the previous game.

Meanwhile, today’s fixture was overshadowed by South African star Quinton de Kock's refusal to take the knee prior to the game as he pulled out citing ‘personal reasons’.

He was replaced by Heinrich Klaasen behind the stumps, who made one fumble but was otherwise tidy, and Reeza Hendricks at the top of the order, who set the tone for the chase.

Aiden Markram has become South Africa's highest run-scorer in men's T20I cricket in 2021 in this innings.

This was the 16th T20I meeting between two times and just the fourth time Proteas managed to clinch the game.

Earlier, the Pollard-led squad put up 143 runs on the board for the loss of 8 wickets in their match against South African in T20 World Cup 2021.

West Indies batter Evin Lewis dominated the scoring and reached fifty in just 32 balls while the skipper scored 26 runs in the end.

The 29-year-old left-handed batsman kept his nerves calm and controlled as the Windies were losing wickets after regular intervals. A 73-runs opening partnership between Simmons and Lewis provided a steady start to Men in Maroon.

For South Africa, Dwaine Pretorius was the leading as he bowled three players in two overs. Keshav Maharaj bagged his wicket in the 11th over to make a way for Proteas to come back in the fixture.

Dwaine Pretorius bagged quick three wickets to restrict Windies while Kagiso Rabada and Anrich Nirtje got one wicket each.

Proteas need 144 runs to win, the opening players need to keep the momentum going as it’s not easy to chase of 144 runs against the defending champions.

Earlier, Temba Bavuma has won the toss and elected to field first against the defending champions in the T20 World Cup match today.

Both sides will look to up their batting displays when they face each other, the match will start at 3 pm at Dubai International Stadium.

West Indies and South Africa are part of group 1 in the cricket mega event while both of them lost their previous games in the tournament.

Windies skipper will expect better application from the batters who poorly performed in the T20 World Cup 2021 Super-12 stage group 1 opener against England. Meanwhile, Proteas faced a hard time playing against the Australian side in their first fixture.

South Africa and the Windies have faced each other three times at T20 World Cups while Proteas clinched the 2007 and 2009 game and, West Indies won the 2016 – the same year they bagged the World Cup.

Meanwhile, in today’s game, the team winning the toss will opt to field first in light of the due factor as most squads choose to bowl first in these kinds of situations.