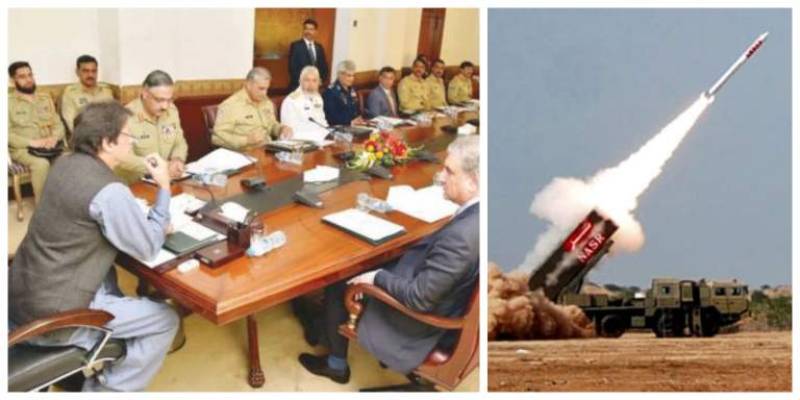 ISLAMABAD -Prime Minister Imran Khan chaired a crucial meeting of the National Command Authority on Wednesday and expressed satisfaction over the nuclear capability of the country.

The top civil-military officials gathered in Islamabad in order to review the situation after India's continued violation of Line of Control which led to a recent escalation of tension between two nuclear-armed neighbours.

The NSC meeting, chaired by the premier in the wake of India’s aggression, was attended by Chairman Joint Chiefs of Staff Committee, the Chiefs of all three services and Director General Inter-Services Public Relations (DG ISPR) Major General Asif Ghafoor.

During the meeting, DG ISPR gave a detailed briefing on the security mechanism of the nuclear arsenal and expressed satisfaction over the fool-proof security measures taken by the country.

It was agreed in the meeting that Pakistan was capable of defending itself in every way and will maintain the capability of nuclear deterrence.

NCA is the apex civilian-led command to oversee the employment, policy formulation, exercises, deployment, research and development, and operational command and control of Pakistan’s nuclear arsenals.

The meeting was of extraordinary importance as it was convened on a day Pakistan Air Force shot down two aircraft of India while capturing a pilot alive as well.

Tension between India and Pakistan escalated after India violated the Line of Control in the wee hours of Tuesday before being whisked away by Pakistan Air Force.

Pakistan’s Prime Minister Imran Khan offered India one more time to start a dialogue in an address to the Pakistani nation saying, it was nowhere in the interest of Pakistan for it to be used as a base for militancy.