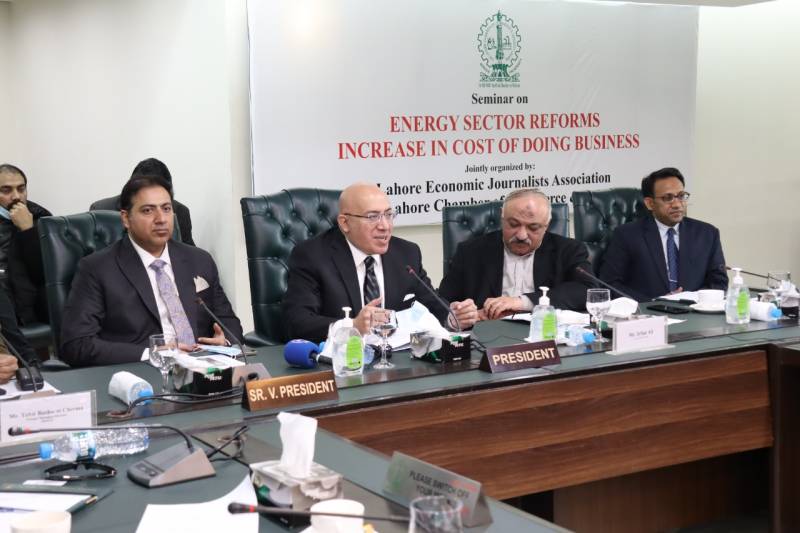 LAHORE – Appointment of experts with vested and conflict of interests while ignoring the fit and proper criteria in the name of power sector reforms is causing further increase in the energy cost which resulted in an increase in cost of doing business.

The concept of Boards in the energy sector was introduced to improve the working of the power sector by formulation of policies which improve the efficiencies and bringing down power generation and distribution cost was marred with the appointment of non-practitioner and political interest appointees. This has increased the cost of the distribution companies (DISCOS), rather to reduce the energy cost of the consumers.

Irfan Ali speaking on the occasion said that during the last three years the appointees in these Boards in the name of reforms managed to increase their meeting attending fee to three times which increased the expenses of the DISCOS. But not a single reform is come so far. Further, the privatization of power sector is impossible in the uniform tariff existence. The government notified a uniform power tariff for all DISCOS irrespective of efficiencies and inefficiencies of different companies.

Irfan referring his two years tenure as secretary of the power division pointed out that the massive campaign against the power theft was launched across the country which resulted in increase in additional almost Rs 260 billion revenue collection from the previous year. This was made possible only with the political support. Thus, the power theft could be minimized with political support when the elected government decided that it will not back the power theft activities, nor ask the transfer and posting of the officials than it could be controlled.

Irfan mentioned The IMF pressurized to end the power sector subsidy on the life line consumers which was averted during his tenure. However, power tariff is adversely affected by the rupee devaluation and consumers are suffering. Monthly circular debt was brought down to Rs 12 billion from Rs 35 billion which also witnessed in overall circular debt stock, he added.

On energy mix, he pointed out that a demand driven estimate was already prepared during his time from National Transmission and Dispatch Company (NTDC) till 2040 under which the cheapest available energy will be acquired in accordance with the country requirements while no additional energy will be added into the system to avoid any capacity and other charges. However, this mix was changed by NEPRA. He believed that the power sector issues could not be resolved in one night. There is need of concentrated efforts on energy generation, distribution, supporting the line staff and political will as the theft was bringing down during his tenure. Further, privatization was not possible while the existing human resource in the power sector have ability to correct the system with the political support.

Tahir Basharat Cheema suggested establishment of Power Sector Advisory Committee similar like Economic Advisory Committee (EAC) with a task of policy making and advise on the sector to the government. There are issues in the IPPs contract, while the government is not financing the sector while the sector is asked running own its own. So once the project is completed on investors money, or with loans than the cost of the energy increases. Additionally, the higher invoice of the power station which also approved by the government increasing the energy cost. Further, the consumer is indiscipline. He believed that the privatization of the power sector not possible even in the next one and half decade as no government has political capacity of took this huge responsibility.

Cheema pointed out that overall default money of the power sector is Rs 1.6 trillion out of which Rs one trillion is due on private sector and Rs 600 billion on the public sector.

Responding to a question about political appointments in the Board including the Chairman of the NTDC Naveed Ismail, Cheema revealed that the Securities & Exchange Commission of Pakistan (SECP) had made a fit and proper criterion for board members appointments, and which should be strictly followed. Those individuals who do not fall fit on the criterion and if there is any conflict of interest, should not be on the Boards. Further, he made a staggering revelation that one former official with non-executive authority who was a close advisor to the Prime Minister Imran Khan, managed to place around 42 of his closest aides on the power sector Boards, and questioned that in such cases how the good policies could be made and followed. He also believed that the Boards should be worked within their limits and should not take or use the powers of the CEOs and executives of the companies.

Irfan Ali commented that Lahore High Court an ongoing petition against appointment referred it to the Secretary Cabinet Division and hoped that the Division will address it in accordance with within the stipulated timelines in line with the order of the court orders.

Mian Nauman Kabir pointed out that the government ends the stakeholders’ representation on the DISCOS as previously the business community representatives were also on the LESCO Board. However, now the government did not give them representation on Boards. He said the cheap energy and cheap financing were two key components for the economic growth of the country. If the government ensure these two components than nothing can stop the country from progress. He also stressed the need of improving the energy mix by focusing towards the renewable cheaper and environment friendly energy generation.