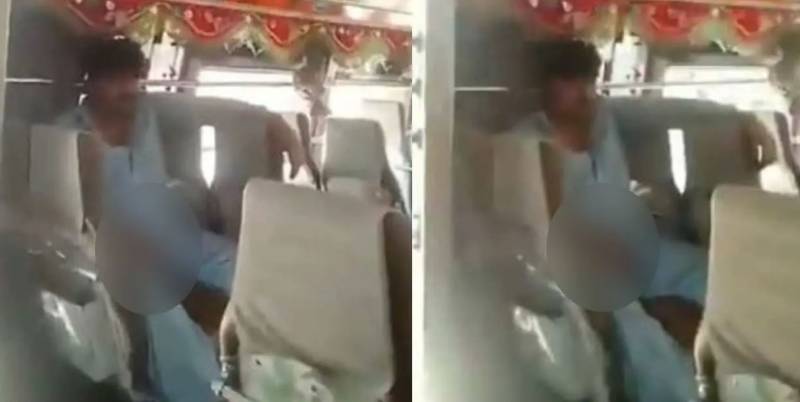 LAHORE – In another awful incident of harassment, a woman passenger had to confront a bus conductor who kept touching himself while seating in front of a woman on the Lahore-bound vehicle.

The woman, who was traveling from Zafarwal to Punjab capital city, filmed the culprit while shamelessly ‘jerking off’ right in front of her.

The disgusting clip was recorded by the women secretly as she decided to expose the pervert. The clip was posted on May 25 on the microblogging site Twitter. A social media user, who goes by the name of Mian Zahid Hussain, shared the video that shows the obscene act on the moving bus.

The bus operates between Sadwal village of Zafarwal and other cities of Punjab, concluding its journey in Lahore.

The social media user also tagged Punjab police and the official account of Punjab Chief Minister Usman Buzdar to look into the matter as harassment complaints are common in public transportation.

As for now, no law enforcement agency has made any statement in this regard while the identity of the shameless man is yet unknown.

According to a recent report of the National Commission on the Status of Women, almost 50 percent of women they interviewed from the public sector had faced any kind of harassment. Street harassment jeopardizes the safety of young women and girls.

Let it be known that insulting the modesty of women or sexually harassing them, is a crime under Section 509 of the Pakistan Penal Code (PPC). Any violator of this crime may be punished with imprisonment, which may extend to 3 years or to a fine up to Rs500,000 or with both.

KARACHI – In a bizarre event in Sindh capital, a girl travelling with her mother beat up a rickshaw driver who ...