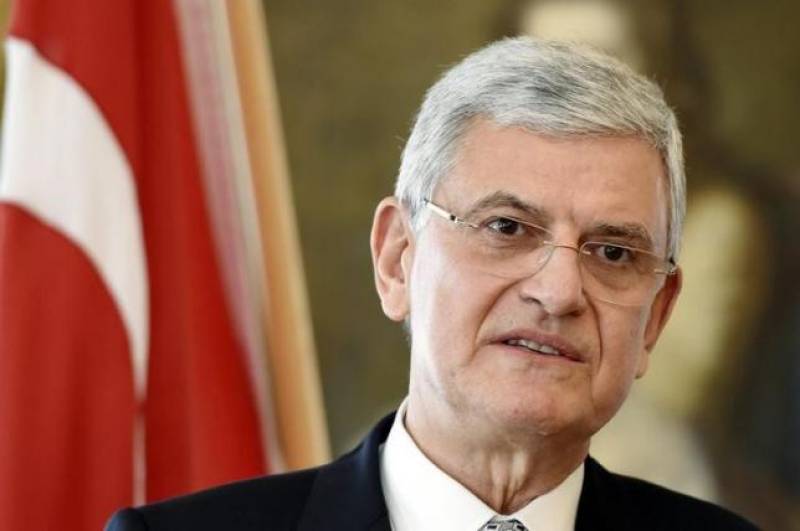 ISLAMABAD – UN General Assembly (UNGA) President Volkan Bozkir has called upon Pakistan and India to pursue the path for peaceful resolution of the Jammu and Kashmir issue.

Speaking at the National Defence University Islamabad on Thursday, Bozkir said peace, stability and prosperity hinges on normalization of relations between Pakistan and India, which is possible by finding the two countries resolution of the Jammu and Kashmir dispute.

The UNGA president said he has encouraged all the parties to refrain from changing the status of the disputed territory.

Bozkir said that the UN's inaction on the issue of Palestine is hurting its credibility.

"Inaction on the issue of Palestine, which is a grave matter, is damaging the credibility of the United Nations and the Security Council," Bozkir said, adding that it is hoped that the Security Council will also hear a unanimous vote on this important and necessary issue.

"Hundreds of Palestinians have been killed in blatant human rights abuses. Negotiations are urgently needed to establish two independent states. The UN General Assembly will not sit idly until peace is restored in the Middle East," he said.

Foreign Minister Shah Mahmood Qureshi and President of United Nations General Assembly Volkan Bozkir on Thursday in a meeting held here discussed matters of international and regional importance, including the Palestine and Jammu and Kashmir.

The Foreign Minister welcomed the UNGA President at the Ministry of Foreign Affairs who arrived in the capital on Wednesday on a three-day visit.

The Foreign Minister appreciated the efforts of UNGA President to convene an emergency session of the General Assembly on Palestine.