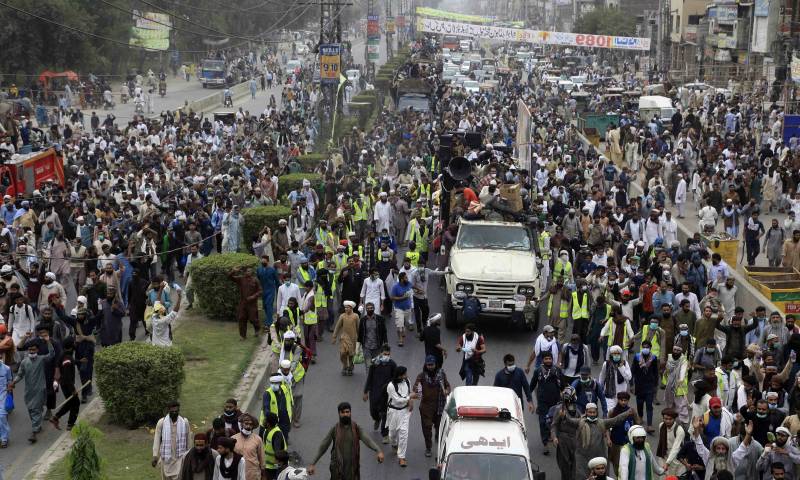 RAWALPINDI – The local administrations of Rawalpindi and Islamabad blocked the Faizabad intersection as Tehreek-e-Labbaik Pakistan (TLP) on Tuesday announced to continue march towards the federal capital.

Provincial authorities have directed the district police officers of Khushab Toba Tek Singh, Mianwali, and Bahawalpur to report to the Regional Police Officer of Rawalpindi along with extra personnel, to assist the police to tackle the agitators.

Reports in local media cited that the development came after Prime Minister Imran Khan chaired a meeting at Bani Gala wherein "it was decided not to give any leeway to the banned outfit".

The government has decided that further talks with TLP would be held only if ended its protest march.

Earlier, the interior minister, who was leading negotiation with TLP, said the government had “no reservations” over any of the demands put forward by the right-wing party except for the closing of the French embassy and expulsion of its ambassador.

Meanwhile, TLP leader Mufti Wazir Rizvi said the incumbent government failed to keep its word and they would continue its march from Muridke.

The banned party has been staging protests demanding the release of detained leader Saad Rizvi, removing the outfit’s name from the list of the banned outfit, the shutting down of the French embassy, and the expulsion of its envoy over the blasphemous caricatures.

According to sources, police deployment was to be carried out in the garrison city before dawn and the roads were blocked with containers and barbed wire to prevent any protest.

ISLAMABAD – Tensions started to ease out as the talks between the government and outlawed Tehreek-e-Labbaik ...