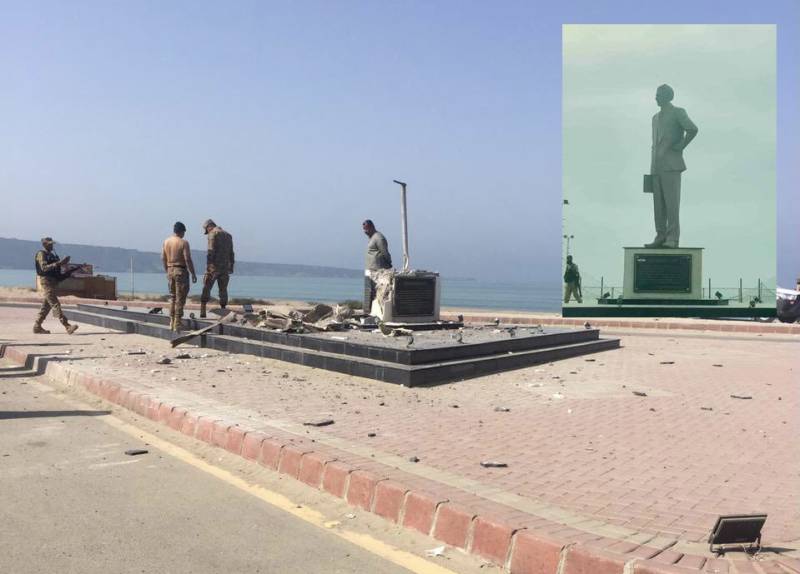 QUETTA – A statue of Pakistan’s founder Quaid-i-Azam Mohammad Ali Jinnah was destroyed in a terrorist attack by a banned Baloch outfit on Sunday.

Reports quoting officials cited that the outlawed Baloch Liberation Front claimed responsibility for the bombing of Jinnah’s statue which was mounted at Marine Drive earlier this year.

The terrorists reportedly planted an explosive device beneath the statue which completely destroyed the sculpture however the nature of the blast was yet to be ascertained.

Meanwhile, a case has been registered at the CTD Gwadar police station under the Seven ATA and the Explosives Act,

Gwadar Deputy Commissioner Major (retd) Abdul Kabir Khan speaking with an international news outlet said the matter is being investigated at the highest level while adding that the militants visited the area as tourists.

Meanwhile, no arrest has been made so far as officials mentioned to probe the matter from all angles.

A balloon-like object sent Indian officials into frenzy in occupied Kashmir on Sunday. According to reports, what was ...

Balochistan’s Senator Sarfraz Bugti also shared a tweet in this regard in which he termed it as an attack on the Ideology of Pakistan. “I request authorities to punish the perpetrators in the same way as we did with those behind the attack on Quaid-e-Azam residency in Ziarat”, he added.

The demolition of Quaid-e-Azam's statue in #Gwadar is an attack on Ideology of Pakistan. I request authorities to punish the perpetrators in the same way as we did with those behind the attack on Quaid-e-Azam residency in Ziarat. pic.twitter.com/BQeeZjsHg3

Earlier in 2013, Baloch terror outfit destroyed Jinnah’s residency at Ziarat, the residence of Pakistan’s founder where he spent the last days of his life.