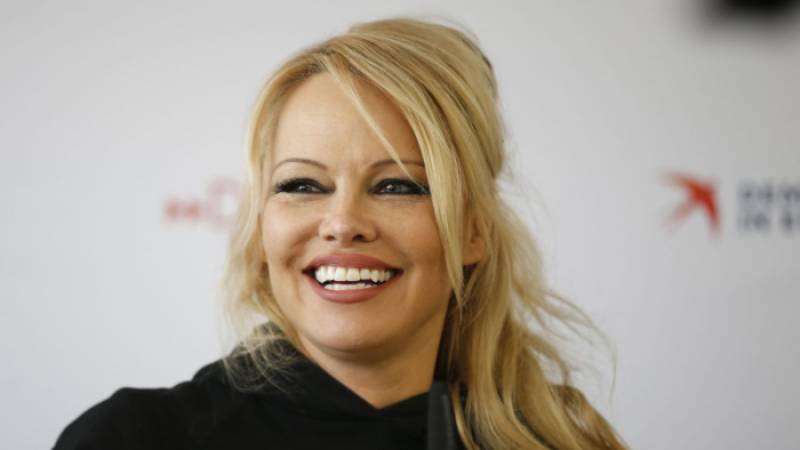 Actor-model Pamela Anderson and her bodyguard Dan Hayhurst exchanged their vows in an intimate ceremony at her home on Canada's Vancouver Island.

The Baywatch star had a whirlwind romance as she fell in love with Hayhurst during the lockdown, according to Daily Mail.

For her wedding attire, the 54-year-old actress opted for a  beige vintage blouse from her closet and teamed it with a blue satin corset from Lace Embrace and a blue tulle skirt from Joanna Delaney’s collection. Styled by Janet Adrienne Ross, the look was completed with an organza polka-dotted white veil from Valentino.

Here is the picture of the wedding cake:

The wedding ceremony was conducted by a local pastor and blessed by Canadian First Nation representatives.

Anderson revealed: "I was married on the property I bought from my grandparents 25 years ago. This is where my parents were married and they are still together. I feel like I've come full circle. I think this romantic property has a lot of healing energy. I'm at peace here. It's a big property but a few people passing by could see the fairytale gown with the long Princess Diana veil dragging in the mud. Heaven."

Keeping things private, the couple chose to have no family or friends and the ceremony and no bridal party.

Anderson was previously married to Rick Salomon twice, in 2017 and 2014. Earlier she was married to Tommy Lee and Kid Rock.

The Dolly Ki Aayegi Baraat famed actress Natasha Ali revealed that she got married during the lockdown in a simple ...