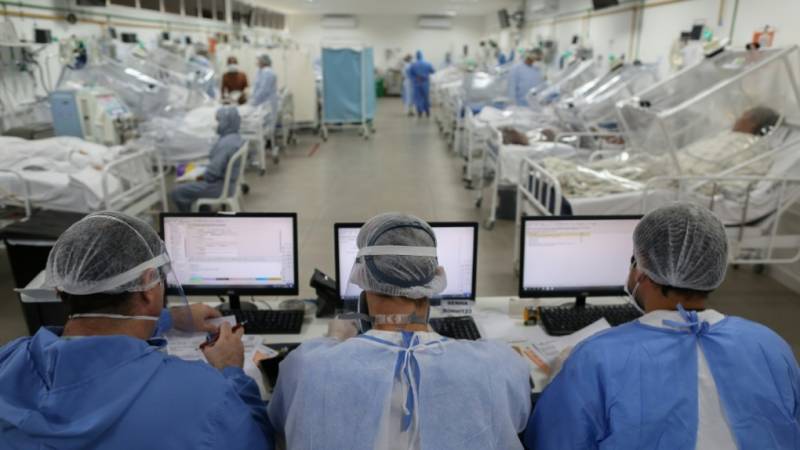 ISLAMABAD – The number of coronavirus infection cases across the world has risen to over ten million while the pandemic has so far claimed more than five hundred thousand lives.

Over 5.4 million patients have recovered from the disease that first emerged in China about six months ago.

One million new cases were recorded in only six days, just as countries start to unwind punishing lockdowns that have devastated their economies and thrown millions out of work.

The United States, the hardest hit country, has surpassed 2.6 million cases alone, as efforts to reopen the world's economic powerhouse were set back by a jump in new infections in states such as Florida.

Infections are also up in some other parts of the world that have reopened, with Europe now registering over 2.6 million.

RIO DE JANEIRO – Brazil has reached a deal to produce up to 100 million doses of ...

China on Sunday imposed a strict lockdown on nearly half a million people in a province surrounding Beijing to contain a fresh coronavirus cluster.

The tension between reopening battered economies -- efforts pushed in the US by President Donald Trump -- and public health is a source of debate in nearly every country.

On Saturday alone the US recorded more than 43,000 new cases, according to a tally by Johns Hopkins University. US deaths now exceed 128,000, approximately one-quarter the world total of over 5 million.

Across the Atlantic, the EU on Saturday pushed back a decision on a list of "safe countries" from which travellers can visit Europe -- a list which could exclude the US.

In India, densely populated cities have been particularly hard hit. The country set a daily record Saturday with 18,500 new cases and 385 deaths. Total infections are at 509,000, with more than 15,600 deaths.

In the Middle East, the governor of Bethlehem announced that the Palestinian city would temporarily close due to rising infections.

Iran, which has struggled to curb its outbreak even as it gradually lifted restrictions from April, has launched a mask-wearing campaign.

Brazil -- the second hardest-hit country after the US -- recorded 990 deaths on Saturday, the highest toll in the world that day, while Mexico recorded the second highest at 719. In Brazil, number of infections have risen to over 1.3 million with over 57,000 deaths.

The virus has also thrown world sports into turmoil. Pakistan's cricket board announced it would leave 10 players off its tour of England after they tested positive.

LAHORE – The total number of coronavirus cases in Pakistan has reached to 283,487, according to the latest ...