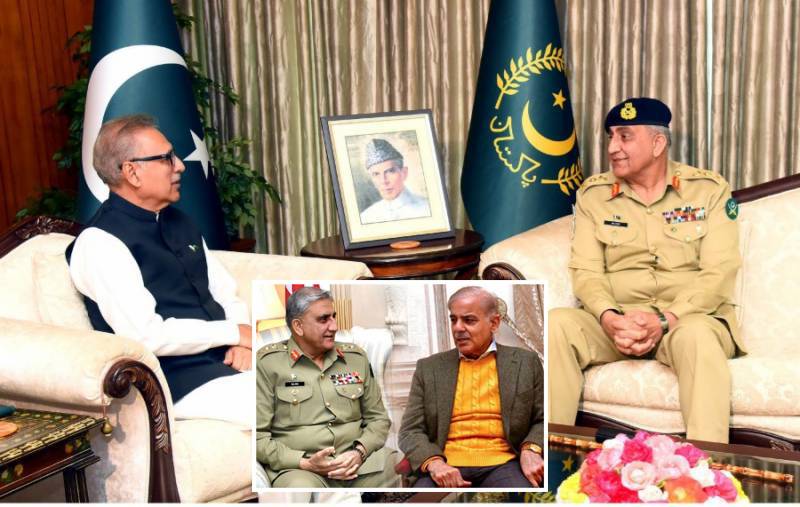 General Bajwa called on President Arif Alvi at the President's House in the federal capital Islamabad. President commended his services and expressed his best wishes for the retiring general.

The outgoing chief also called on Prime Minister Shehbaz Sharif at PM House where the premier paid tribute to the outgoing general for his services. The premier expressed best wishes for Gen Bajwa.

Prime Minister also held a luncheon in honour of the outgoing top general, per reports.

Earlier, it was reported that Prime Minister, who is in Lahore over the weekend, will travel to the federal capital and will hold a luncheon in honour of the outgoing army chief.

General Bajwa is set to retire on November 29 after completing his six-year stint as Pakistan Army chief. The four-star general of the Pakistan Army, is the tenth and current Chief of Army Staff (COAS) since November 29, 2016.

He was appointed to the highest military office by Nawaz Sharif, the then prime minister of Pakistan, on completion of three-year tenure of his predecessor, General Raheel Sharif.

He is a recipient of Nishan-e-Imtiaz and Hilal-e-Imtiaz. In 2017, he was awarded the Turkish Legion of Merit for promotion of defence ties between Pakistan and Turkey.

The Forbes magazine ranked him the 68th most influential person in the world and the fourth oldest Chief of Army Staff (COAS).