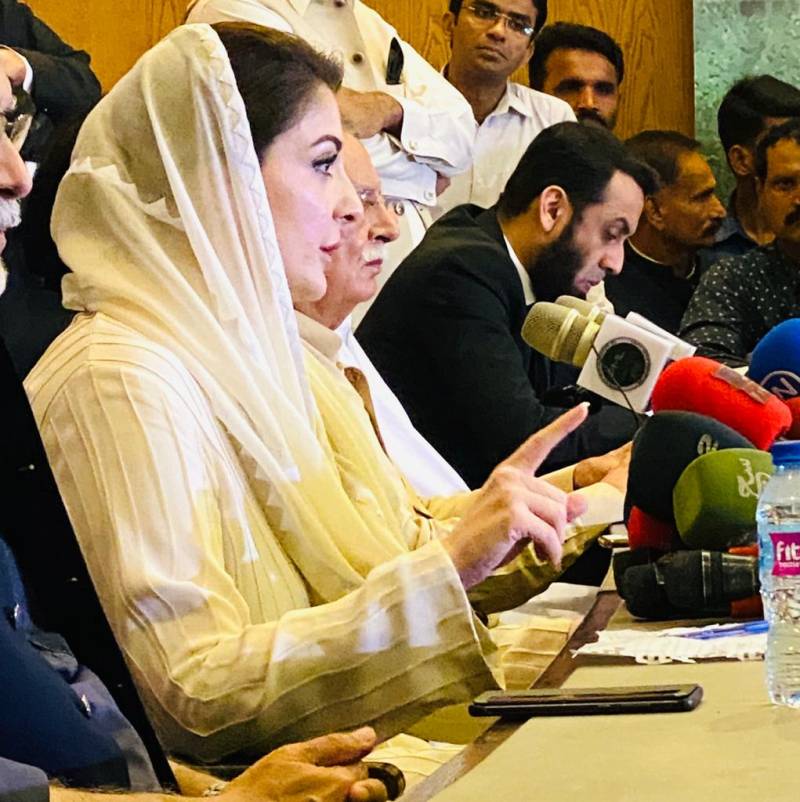 LAHORE – The top leadership of Pakistan Muslim League on Monday lashed out at the country's establishment and the ruling party, PTI, for "a poor state of accountability and justice in the country" hours after the party's president Shehbaz Sharif was arrested by the National Accountability Bureau (NAB).

Flanked by Ahsan Iqbal and Rana Sanaullah at a press conference in Lahore, PML-N Vice-President Maryam Nawaz said "Lt Gen (r) Asim Saleem Bajwa and his family would have been in jail instead of Shehbaz Sharif if justice done in the country.”

Drawing a comparison between the controversy about the family business of CPEC Authority's chief and her uncle's case that includes charges of money laundering, she hit out at the PTI government for not taking any action against the former Army officer for allegedly having “illegal assets” abroad.

"It is a very sad day" because the opposition leader (her uncle) is arrested again," Maryam regretted.

“Shehbaz Sharif’s arrest is the result of NAB-Niazi nexus,” she asserted, while claiming that the judiciary and the media are being pressurised.

Shehbaz, who is Leader of the Opposition in the National Assembly, was arrested after the Lahore High Court rejected his bail plea in a money laundering case.

Maryam said the only reason Shehbaz was arrested was that he "has not left his brother's side".

"He not only did not leave his brother's side, but he showed loyalty and commitment to his brother and his cause and did not waiver for a second. His wife and children were made absconders, [his son] Hamza is in jail and has coronavirus. Despite this, he stands with his brother unwaveringly," she further said.

Earlier, in a tweet, she addressed the ruling PTI and said that they could not cover the “stolen mandate” even after the arrest of Shehbaz Sharif. She vowed that they would follow all the decisions taken in the Opposition’s All Parties Conference.

Maryam leads the former ruling party as interim president in the absence of Shehbaz Sharif.

This is a developing story and will be updated soon...