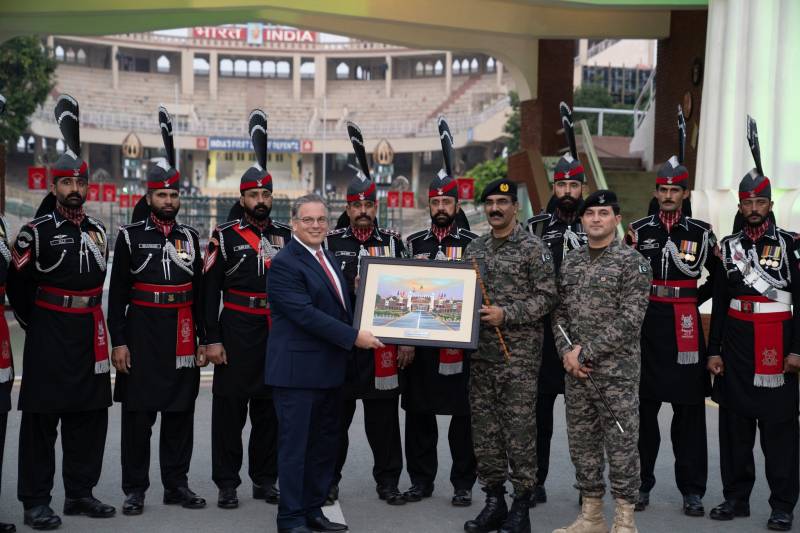 LAHORE – US Ambassador to Pakistan Donald Blome visited the Wagah border on Tuesday and attended the flag-lowering ceremony, where Punjab Rangers and the Indian border force marched and performed the choreographed moves.

The visiting dignitary cheered the enthusiasm of the people attending the flag-lowering ceremony.

During his visit to Punjab, and in celebration of 75 years of U.S.-Pakistan bilateral relations, #AmbBlome visited the Wagah Border to observe the flag lowering ceremony. #PakUSAt75 pic.twitter.com/khr0JRFkPb

Reports in local media said the US envoy will also attend the Pakistan-England T20I match at the Gaddafi Stadium tonight.

During his three-day maiden visit to the country’s cultural capital since his arrival in Pakistan, the US envoy visited various places besides watching the flag-lowering ceremony at Wagah. He also praised the cultural heritage of Lahore.

LAHORE — US Ambassador Donald Blome said on Monday the devastation caused by the recent floods in Pakistan was ...

Blome said the US government was proud of playing its role in the preservation of the cultural sites in different parts of the country through the Ambassador’s Fund, adding that projects like cultural restoration exemplify the depth and breadth of our partnership.