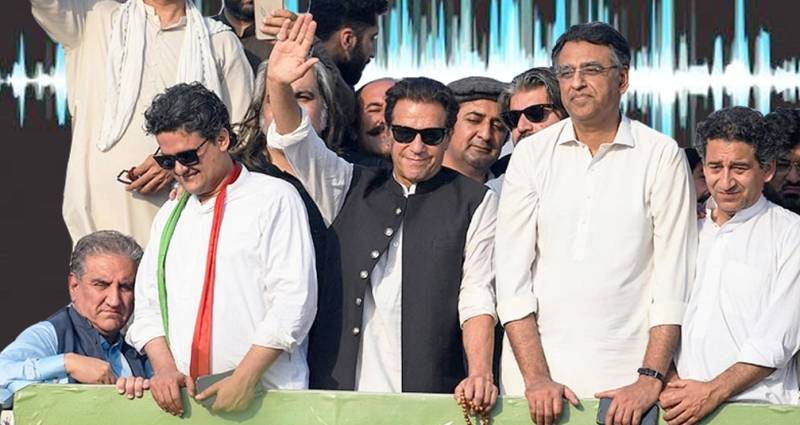 In a turn of events straight out of a spy movie, Khan’s clip surfaced days after several audio leaks surfaced from inside Prime Minister’s house.

The alleged audio seems to be recorded at the time when former PM claimed that the Sharif led alliance had conspired with Washington to oust him from premiership.

As the leaked audio is doing rounds on internet, PTI leaders started defending the alleged conversation, claiming that the cipher was real.

The audio leaks confirm the attempt to hide US cipher from [then] Prime Minister Imran Khan, Fawad Chaudhry wrote.

Hammad Azhar, another PTI leader, said “When Imran Khan was in power, his govt was removed following the exact same script as was given in the cipher. Let that sink in.”

When Imran Khan was PM, his govt was removed following the exact same script as was given in the cipher. Let that sink in.
I think the cipher should be released now and the people of Pakistan should decide whether it was a conspiracy or even more than that. https://t.co/kCpw8WzPEr

He added that the cipher should be made public and the Pakistani people should decide whether it was a conspiracy or even more than that.

In the un-dated audio clip, a voice said to be that of PTI chief, can be heard saying “We have to play now… not going to mention US…We have to play on the fact that this date [of no-confidence motion] was pre-decided”.

‘We just have to play with it’: Imran Khan’s audio leak about US cipher surfaces

The other man, who is believed to be the then-principal secretary, Azam Khan, responded sir, I was thinking that on the cipher… we should called a meeting. If you remember, the envoy had written at the end that a demarche should be sent. Even if we are not going to issue a demarche… because I thought about all of this all night… You said that they have raised this issue but no, then I thought about how to cover this”.

Also, the former principal secretary to PM allegedly advises defiant politician to talk to the then Foreign Minister Shah Mehmood Qureshi and the foreign secretary on the matter.

PTI chief then said it has been written by the ambassador, to which Azam said But we didn’t receive the copy, how did they take it out?

The ousted premier then exchanges views with Azam Khan to chalk out the narrative for the masses as well as the world leaders.

In the end, the ousted premier can be heard saying “Anyhow, let’s turn it into a foreign conspiracy”.

Former Information Minister and PTI leader Fawad Chaudhary responded to the matter, saying the alleged audio leaks reveal an attempt to hide the US cipher from then Prime Minister Imran Khan.

Earlier, PTI leader Fawad Chaudhry had claimed that conversations of PM Shehbaz have been put up for sale on the dark web; however, the recent leak reveal that the bugging process started before anyone was aware of it.