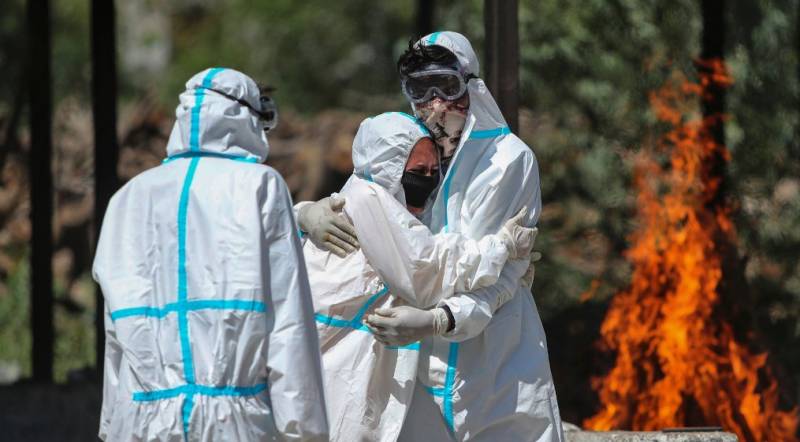 WASHINGTON – The US government has asked its citizens to leave India as soon as possible as India's total COVID-19 cases passed 18 million on Thursday after another world record daily infection.

India reported 379,257 new COVID-19 cases and 3,645 new deaths on Thursday, according to health ministry data. It was the country's highest number of deaths reported in a single day since the start of the pandemic.

Hospitals have been overwhelmed while oxygen is in critically low supply. Several parts of the country are under lockdown and curfew, including capital Delhi.

In a statement, the US State Department advised its citizens not to travel to India or to leave as soon as it is safe to do so.

Register in the Smart Traveler Enrollment Program (STEP) at https://t.co/vr68I6fCV6 to continue receiving updates from the U.S. Embassy and Consulates

Earlier, the White House said in a statement on Wednesday the United States was sending supplies worth more than $100 million to India to help it fight a surge of COVID-19 cases.

The supplies, which will begin arriving on Thursday and continue into next week, include 1,000 oxygen cylinders, 15 million N95 masks and 1 million rapid diagnostic tests, the statement said.

The United States also has redirected its own order of AstraZeneca (AZN.L) manufacturing supplies to India, which will allow it to make over 20 million doses of COVID-19 vaccine, according to the White House.

India will receive a first batch of Russia's Sputnik V vaccine against COVID-19 on May 1. Russia's RDIF sovereign wealth fund, which is marketing Sputnik V globally, has already signed agreements with five leading Indian manufacturers for over 850 million doses of the vaccine a year. read more

Bangladesh on Thursday said it will send about 10,000 vials of injectable anti-viral, oral anti-viral, 30,000 PPE kits, and several thousand zinc, calcium, vitamin C and other necessary tablets to India.

Germany will send 120 ventilators to India on Saturday, followed by a mobile oxygen production facility next week, its defence ministry said.

Earlier this week, Australia banned all flights from India to relieve pressure on the nation’s system of mainly quarantining returned residents from overseas in inner-city hotels, after a jump in infections.

The United Kingdom has barred any visitor who has been in India in the previous 10 days from entering.

British and Irish nationals arriving in England from India must quarantine in a hotel.

In a desperate attempt to save her Covid-19 positive husband, an Indian woman tried to resuscitate him by breathing ...