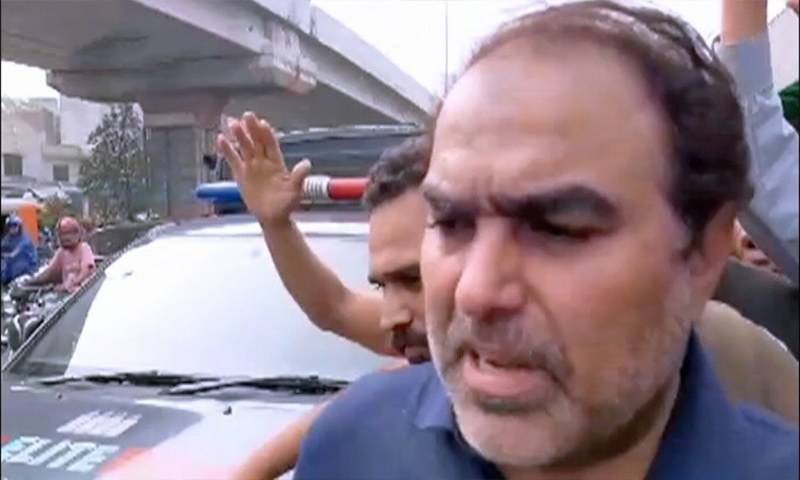 A local court in Lahore on Thursday sent PTI MPA Nazir Chohan on two-day physical remand in the custody of Federal Investigation Agency (FIA) in a case registered by prime minister's aide on accountability, Shahzad Akbar.

The FIA team produced him before the court of Judicial Magistrate Yousaf Abdul Rehman and sought 14-day remand to complete interrogation.

Prosecution counsel informed the court that Chohan uploaded material on social media against Akbar, adding that FIA will recover the accounts of the suspect and they will be part of the investigation.

However, the court approved the remand for two days.

"In order to facilitate the investigation and for the purpose of recovery, a two-day physical remand of the accused is granted," said the court order.

On Wednesday, the FIA arrested PTI MPA Nazir Chohan, a member of the disgruntled PTI leader Janaghir Tareen's group, in Lahore on Wednesday for second time in two days in a case registered by the prime minister's on Accountability Shahzad Akbar.

The FIA has shifted Chohan to its office and will produce him before Judicial Magistrate Yousuf Abdul Rehman tomorrow (Thursday).

The case was registered on July 8 under Sections 11 (hate speech) and 20 (offences against the dignity of a natural person) of the Prevention of Electronic Crimes Act, 2016 and read with Sections 298 (uttering words to wound religious feelings), 500 (punishment for defamation), 505(c), 506 (punishment for criminal intimidation) of the PPC and Section 29 of the Telegraph Act, Dawn reported.

The PM’s aide has accused Chohan of making statements on his religious beliefs on social media. "The complainant is aggrieved of a systematic and organised hate campaign which has been launched against him by Nazir Chohan and others at his behest on social media and WhatsApp chats," the FIR said.

The FIR further said that "the motive behind this malicious, hateful and defamatory social media campaign is to discourage the complainant from the proactive role that the complainant is playing in curbing corruption and ensuring accountability in Pakistan."

The arrests comes a day after the PTI MPA was nabbed on Tuesday following the filing of an FIR at Lahore’s Race Course police station by Shahzad Akbar who alleged Chohan for false claims about his faith in a television show.

The case against Chohan was registered under sections 506 (punishment for intimidation), 189 (threatening public servant), 298 (hurting religious sentiments), and 153 of the Pakistan Penal Code.

Later, a local court in Lahore granted bail to Nazeer Chohan after police arrested him from the Jauhar Town area.

Police had produced the PTI leader before a judicial magistrate where he was ordered to submit bail bonds worth Rs100,000. The court further ordered that he will be sent to jail for 14 days upon failing to submit bonds.