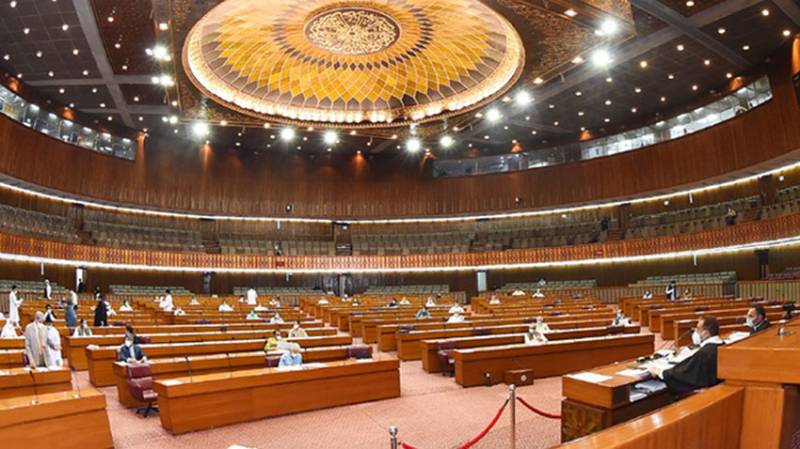 ISLAMABAD – The National Assembly on Monday passed the Finance Bill 2020, giving legal effect to the budgetary proposals for next fiscal year, the state broadcaster reported.

It was moved by Minister for Industries and Production Hammad Azhar.

The amendments proposed by the Opposition in the Finance Bill, 2020 were rejected by the House.

It is a tax-free and relief oriented budget with a total outlay of 7,294.9 billion rupees.

The net capital receipts have been estimated at 1463.2 billion rupees, which are 75.93 percent higher than the outgoing fiscal year.

The size of Public Sector Development Program for 2020-21 is 1,324 billion rupees. Out of this, 676 billion rupees have been allocated to provinces.

The government has formulated a special development programme worth 70 billion rupees to offset the negative impact of Coronavirus pandemic and other calamities and improve the living standard of people.

Some 10 billion rupees have been earmarked to provide relief to the agriculture sector and fight the crop munching locusts. Besides, the government reserved 69 billion rupees for water related projects. Allocations for Ehsaas Programme have also been enhanced to protect the vulnerable groups of the society.

Prime Minister Imran Khan also arrived at the National Assembly session, where the clause-wise amendments to the Finance Bill began in order to sail it through the House.

Taking the floor, Minister for Industries and Production Hammad Azhar said the government has presented a tax free budget and it envisages relief measures not only for the construction sector but also for promotion of mobile phone manufacturing and electric vehicles. He said duties and taxes on import of sixteen hundred raw materials have been brought to zero.

He said it is the first time that the annual development plan carries the biggest allocations for Balochistan and Sindh.

The minister clarified that the government has not increased the sales tax or petroleum development levy on petroleum products. He said their prices have been increased keeping in view the upward trend in the international oil market. He said mafias in oil, sugar and flour will be brought to justice.

PML (N) Parliamentary Leader Khawaja Asif said the government should provide relief to the masses. He regretted the increase in the prices of petroleum products.

Also, PPP Chairman Bilawal Bhutto Zardari criticized the government for increasing the prices of petroleum products saying it will add to the woes of the masses and lead to price hike. He said our aim should be providing relief to the people. He was also critical of increase in the prices of flour, sugar and medicines.

The House will now meet again tomorrow at 11 in the morning.