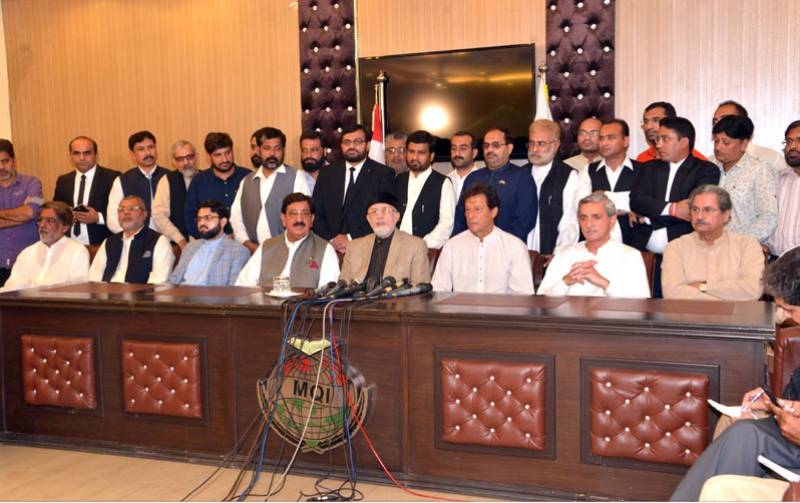 LAHORE - Pakistan Awami Tehreek (PAT) Chairman Tahir-ul-Qadri reiterated on Saturday that till resignation of Shehbaz Sharif and Rana Sanaullah, PAT will continue its protest and it can turn into a sit-in.

Addressing the participants at All Parties Conference (APC) convened over Model Town issue, the PAT supremo said that Model Town Massacre and 'Mujhay Kyu Nikala' was the agenda of this APC.

He alleged that Nawaz Sharif introduced horse trading and bribe in politics and has been doing it since Zia regime.

He continued that over 40 parties were standing with him in demand to get justice regarding Model Town incident.

"They all have gathered for support of army, judiciary and state institutions," he stated.

The PAT chief expressed blood of the innocent people killed in the incident is what unites us today.

“The Sharifs ordered the police to open fire and then they tell us to go to courts for justice,” said the PAT chief, adding that there can be no justice till the Sharif brothers are in power.

Firing a broadside at former Premier Nawaz Sharif, the cleric said the former premier's lifelong deeds led to his disqualification.

"Your character has been revealed in the Panama Papers case and now you are planning to run away and leave Pakistan, which is why you are seeking help from foreign powers, alleged the PAT chief while referring to the visit of Saudi Arabia by the Sharif brothers.

Warning the incumbent government, Qadri said that they had the option to protest, stage sit-ins or take other measures which are deemed necessary in their quest for justice.

Pakistan Tehreek-e-Insaf and Pakistan Peoples Party have already assured PAT of bolstering its cause and both Imran Khan and Asif Zardari have visited the PAT secretariat in this regard.

PPP Co-Chairman Asif Ali Zardari met PAT supremo for the second time in the current month on Friday and addressed a joint press conference assuring that the party will abide by all decisions taken in the PAT-called all-party conference scheduled for today.

“Not 14 but 100 people had died in Model Town tragedy as the injured effected for entire life as some of them deprived off from leg and some from their hands,” he said adding that a case if as per clause 302 would be filed against Rana Sanaullah.

Meanwhile, PTI chief Imran Khan also reiterated his support for the PAT chief on Friday, saying Model Town incident is a humanitarian issue and he will always stand by Qadri in raising voice against the injustice.

Let it be known that when the opposition parties would deliberate over a joint strategy against the government, the Sharif duo would be meeting Saudi bigwigs as Nawaz Sharif is set to jet off to the oil-rich kingdom where he would join his brother Shehbaz Sharif.

The Model Town incident on June 17, 2014, had claimed lives of at least 14 people and left over 100 others injured during an 'anti-encroachment operation' by Punjab Police outside Idara Minhajul Quran in Lahore's Model Town giving a major blow to the Shehbaz Sharif led provincial government.