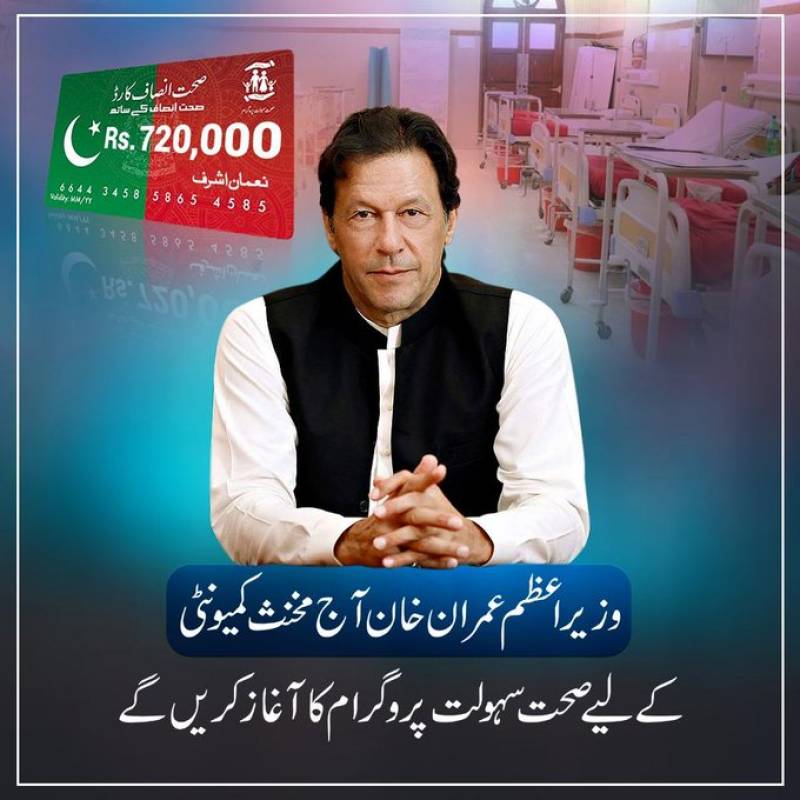 ISLAMABAD Prime Minister Imran Khan Monday launched the Sehat Insaf Card facility for the transgender community, first in the country’s history, to provide succor to, what he said, the most vulnerable segments of the society.

Addressing as a chief guest at the launching ceremony of Sehat Insaf Card under the Sehat Sahulat programme for the transgender community, the prime minister regretted that the previous governments never took responsibility of the most vulnerable sections of the society, including the transgenders.

The present government, he said, had taken the responsibility of transgender community and would give them ‘a sense of ownership’. Pakistan was created on a great idea based upon sense of justice, humanity and humane feelings for the downtrodden, he added.

Criticizing the past regimes, he said they even did not accept the existence of transgender community.The incumbent government would, however, provide them full protection in the society by removing negative perceptions about them.

The government was determined to provide health cards and insurance to all the weaker segments of the society, he added.

The initiative will cater to the individuals of transgender community registered with the National Database and Registration Authority form the Islamabad Capital Territory, Azad Jammu and Kashmir, Gilgit Baltistan and all other provinces.

About the economic turnaround, Imran Khan highlighted that the government faced the most difficult economic challenges last year, but the year 2020 would dawn with progress and prosperity for the countrymen.

The government took steps for the economic stability during 2019 and now would focus on jobs creation for the youth along with giving boost to the industry, he said and mentioned the recently introduced NAB (National Accountability Bureau) amendment ordinance as a step in the right direction.

The prime minister also referred to the government’s flagship social security Ehsaas programme for the alleviation of the economic ordeals of the poor families.

He said through the Utility Stores, subsidized foodstuff would be provided to the public, besides issuance of the ration cards was on the anvil to enable the deserving people to get food items. Moreover, the network of ‘Lungar’ would be spread so that no needy person could be left hungry, he said, adding that loan facility was also being extended to the youth.

“In the year 2020, we will now move forward on the path of progress and prosperity,” he added.

Imran Khan also appreciated Dr Zafar Mirza for floating the idea for extending such facility to the transgender community, saying they had been facing myriad social problems.

Special Assistant to the PM on Health Dr Zafar Mirza said a total of 6.8 million families had been provided with the Sehat Insaf cards and they were making strenuous effort to target all the 15 million deserving ones by the end of next year.

The Sehat Sahulat programme was launched in 84 districts where a total of 300 private sector hospitals had been providing health services to the deserving people, he added.

He said about 50 per cent of the country’s total population had been living below the poverty line, who would be benefited with the ‘potable insurance’ facility.

Dr Mirza said they had discussed the idea in the cabinet which had approved it. He said the government’s social security programmes would have far reaching effects upon the vulnerable communities.

Under a decision of the prime minister, they had given Sehat Insaf cards to all families in Tharparkar and tribal districts and now they were working on provision of cards in the Azad Kashmir and Gilgit Baltistan, he added.

The special assistant said they had collected data about the transgenders with the assistance of their community leaders.

He said with such facility, the families would get the facilities of surgeries and treatment for different chronic diseases.

Dr Mirza also lauded the promulgation of Transgender Protection Act ensuring the equal citizenship by ending discrimination against them in all the sectors.

The prime minister also distributed Sehat Insaf cards among the members of the transgender community.

Reem Sharif, who is employed in an non-governmental organization (NGO) in Islamabad, lauded the initiative what she believed was a step forward towards inclusiveness of the society.

She said earlier, the transgenders had to face a discriminatory treatment at the hospitals, but the Sehat Insaf Cards would grant them equal rights of medical treatment at designated private hospitals across the country.

Lubna Naz, who hails from Lahore and is doing job in the United Nations Development Programme, said the credit went to Imran Khan and the Pakistan Tehreek-e-Insaf for thinking about the betterment of the community, which had faced neglect during the previous governments.

She requested the government to also launch a housing facility for the transgenders and called for true implementation of the bill passed by the parliament last year for the protection of their rights.

Muhammad Faisal Qureshi, a teenage transgender recently employed in the Pakistan Bait-ul-Mal, also spoke high of extending health insurance to the community by the government and believed that it would give them protection and confidence in case of any medical emergency.

Under the Sehat Insaf Card scheme, the treatment for angioplasty, brain surgery, cancer, HIV/AIDS and other diseases will be done free of cost.

LAHORE - This is news that will form the basis of future employments. Transgender Ayesha Moghul will be working in the ...

Earlier this year in May, the Khyber Pakh­tunkhwa government had given Sehat Insaf Cards to members of the transgender community to address health problems being faced by the marginalised section of society.

Previously, under the Transgender Person’s Protection of Rights Act, 2018, it was illegal to deny healthcare services to the transgender community.