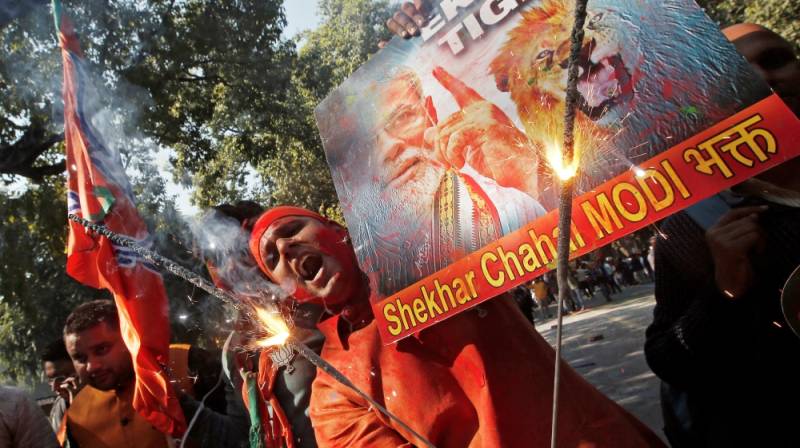 ISLAMABAD – Prime Minister Imran Khan says Pakistan has become the ‘voice of innocent Kashmiris’ by forcefully raising the issue at every forum.

"Pakistan will continue to extend political, diplomatic and moral support to Kashmiris," the prime minister said Monday in a meeting with renowned Kashmiri activist Tony Ashai at the PM House.

The meeting discussed current situation in Indian occupied Jammu and Kashmir with security forces indulging in severe oppression and barbarity against innocent civilians.

PM Khan called upon the international community to realize the anti-Muslim agenda of Indian prime minister Narendra Modi, terming it a threat to regional peace.

“The RSS and Hindutva ideology is an attempt to erase the identity of millions of Muslims, residing in India,” he said.

Ashai apprised the prime minister of his efforts to update the American Senators and Congress members about Kashmir’s humanitarian crisis.

An architect by profession, based in California and being a Kashmiri, Tony Ashai has been a strong advocate of Kashmiris’ rights.

Meanwhile, people in occupied Kashmir continue to suffer immensely due to unrelenting military siege and blockade being witnessed especially by the Kashmir valley and Jammu region on the 148th day.

Restrictions under Section 144 remain in place while prepaid mobile phone, text messaging and internet services continue to be snapped. Startups have become one of the worst casualties of the Internet blockade in the occupied territory. The ban has dealt a severe blow to the small ventures employing hundreds of people.

Shops also remained shut most of the time except for few hours in the day and hardly any public transport seen on the roads. Schools and offices are open but few turn up there.

'India to implode under Hindutva ideology'

“Damage to India is coming from within as Hindutva is tearing apart democratic values,” the foreign minister said in reaction to the maltreatment of Islamic leaders in Uttar Pradesh in India on their protest against the controversial Citizenship Amendment Bill (CAB).

Foreign Minister Qureshi also condemned the manhandling of Congress leader Priyanka Gandhi after Indian police ‘grabbed her by neck and pushed to the ground’.

“How can we expect better for a common man when a prominent political leader like Priyanka Gandhi, is treated this way,” he said.

He said the situation was not confined to just one religion or region, but was gradually spreading to entire India. “India has been clearly divided into two ideologies – one supporting a secular country and other in favour of Hindutva,” he added.

The foreign minister urged upon the international community to rise above their personal interests and take notice of the humanitarian crisis in India and occupied Jammu and Kashmir valley.

ISLAMABAD – The Organisation of Islamic Cooperation has decided to convene a meeting on grim human rights ...