Don't claim victory too soon, I am not finished with you yet: Wilders warns FM Qureshi 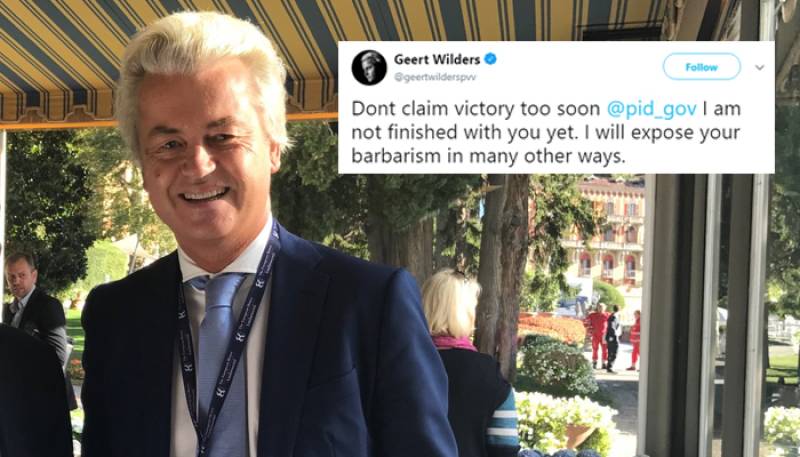 Responding to the statement of Foreign Minister Shah Mehmood Qureshi, Wilders tweeted, “Don’t claim victory too soon @pid_gov I am not finished with you yet. I will expose your barbarism in many other ways.”

Dont claim victory too soon @pid_gov I am not finished with you yet. I will expose your barbarism in many other ways. https://t.co/sP52Uyl3m3

He reacted to the remarks of FM Qureshi as shared by the government of Pakistan official Twitter account in which he said, “Cancellation of blasphemous contest is a great moral victory of Muslim Ummah.”

"To avoid the risk of victims of Islamic violence, I have decided not to let the cartoon contest go ahead," Wilders said on Thursday in a written statement, claiming to have received death threats.

Wilders, who lived for years under round-the-clock protection because of death threats sparked by his fierce anti-Islam rhetoric, said he did not want others to be endangered by the contest he had planned for November.

Islam showed its true face once again with death threats, fatwas and violence.

However, the safety and security of my fellow countrymen comes first. https://t.co/1IL5NFWR7d

Physical depictions of God or the Prophet Muhammad (PBUH) are forbidden in Islam and are considered blasphemous by Muslims. Previous cartoons depicted him have provoked violence.

In 2005, a Danish newspaper published cartoons of the prophet which sparked a wave of protests across the world.

Ten years later, gunmen killed 12 people in an attack on the offices of French satirical magazine Charlie Hebdo, which had published similar caricatures.

“It’s not just about me,” Wilders said in the statement. He said strong opponents of the event “see not only me but the entire Netherlands as a target.”

The Dutch government had been at pains to distance itself from the contest.

The country’s prime minister, Mark Rutte, questioned Wilders’ motive for organising the contest and said he did not support the planned contest, but he would defend Wilders right to hold it.

“His aim is not to have a debate about Islam. His aim is to be provocative,” Rutte said.

However, the prime minister added that people in the Netherlands have far-reaching freedom of speech rights and the government did not intend to seek the contest’s cancellation.

Physical depictions of the prophet are forbidden in Islam and deeply offensive to Muslims.

In Pakistan, thousands of people angered over Wilders' plans marched towards the capital, Islamabad, on Thursday.

About 10,000 supporters of the Tehreek-i-Labaik Pakistan party set out on the march on Wednesday, calling on the government to cut diplomatic ties with the Netherlands.

Pakistan's government had vowed to protest the contest at the United Nations.

The Dutch government has distanced itself from the competition, with Prime Minister Mark Rutte clarifying that Wilders, leader of the opposition Freedom Party, is not a member of the government.

Wilders announced the contest in June and claimed to had received 200 entries so far. The winner was supposed to receive a cash prize.