Karachiites stunned as meteor spotted shooting through the sky (VIDEO) 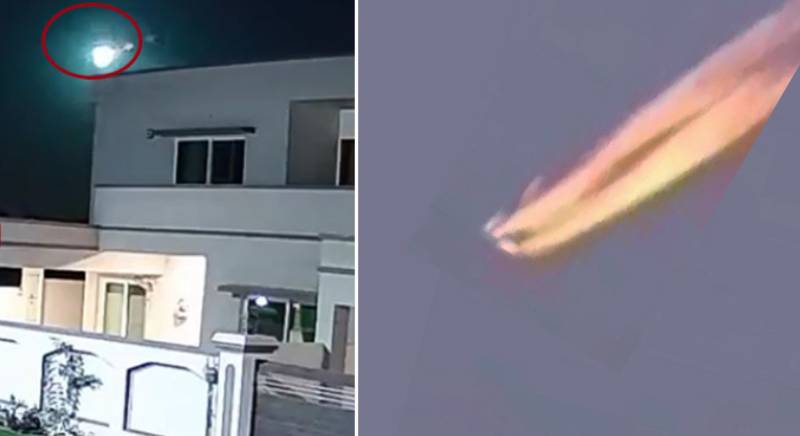 KARACHI – Residents in the country’s seaside metropolis reported seeing a stunning display of flaming trails as a meteor raced through the sky in the southeastern region of Pakistan.

The massive fireball meteor that surfaced over the Pakistan skyline was also captured on camera as stargazers were treated to a stunning display of light at 7:15 pm on Saturday night.

Netizens took to social media where they shared clips that featured a fast-moving glowing object in the sky which was shortly disappeared. Some also reported hearing the sound of an explosion in the sky accompanying the gleaming object.

The event was observed by stargazers and people in metropolis. #Pakistan #Travel
pic.twitter.com/ax8efT4Abe

Celestial experts claimed that the event as the rock could be seen burning up in the Earth's atmosphere, before crashing to the ground.

Rocks from space also known as meteoroids usually travel towards the Earth. These shiny lumps are quite small in size and they incinerate after entering into Earth's gravitational field.

Some meteors also accompany different types of gases and chemicals. As these meteors burn, they produce lights, ranging from blue, green, yellow, or orange. Meteoroids can also create shock waves when they enter Earth's atmosphere which is known as 'sonic boom'. Such events are common in the North and South Poles in light of the gravitational force there.

UFO or meteorite? Huge blast and flash of light in the sky spreads fear and panic in Gilgit Baltistan

Experts suggest that such celestial objects could be dangerous if they are too big in size like asteroids.