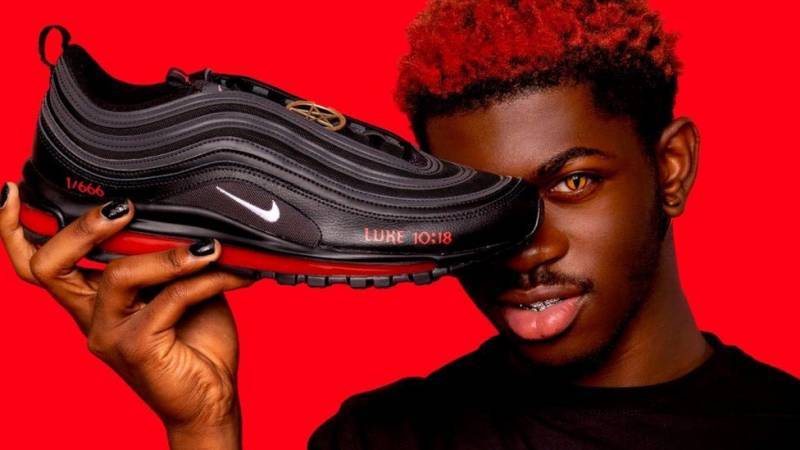 NEW YORK – Nike has responded to the controversial pair of shoes produced by Brooklyn based art collective MSCHF by filing a lawsuit.

Turns out, it's not just conservative Christians who aren't happy with 'Satan Shoes', Nike also has a problem with them, which is why it's suing streetwear company for releasing a modified pair of Nike Air Max 97s, which contains a drop of human blood.

The shoes, despite their controversy, have proved a huge success, with all 666 pairs of the shoes were released and sold out within less than a minute on Monday.

The adapted black and red shoes by MSCHF were produced and launched to coincide with the launch of Lil Nas X’s latest song Montero (Call Me By Your Name). The video for the song debuted last Friday and provoked a huge reaction. In the video, the infamous rapper slides down a stripper pole from heaven to hell wearing a pair of the trainers.

Filing its claim with the U.S. District Court for the Eastern District of New York the sports shoe giant has stated that it does not approve or authorise the customised Satan Shoes. Nike have also requested that MSCHF be prohibited from using the famous Nike ‘Swoosh’ and be stopped from selling the shoes.

The suit reads: "Nike files this lawsuit to maintain control of its brand, to protect its intellectual property and to clear the confusion and dilution in the marketplace by setting the record straight – Nike has not and does not approve or authorise MSCHF's customised Satan Shoes."

As part of it lawsuit, Nike has asked the court to immediately stop MSCHF from fulfilling orders for the shoes and has also requested a jury trial to seek damages. Rapper Lil Nas X is not mentioned in the lawsuit.

Nike have cited a tweet in their lawsuit by popular shoe influencer @Saint, which teased the upcoming release of the shoes in an effort to increase the publicity around the so-called ‘Satan Shoes’ in the U.S.

“The material alterations include at least referring to the shoe as the Satan Shoe, adding red ink and human blood to the midsole, adding red embroidered satanic-themed detailing, adding a bronze pentagram to the laces, and adding a new sock liner,” states the complaint.

Faryal Mehmood has slowly yet surely built a strong niche for herself in the entertainment industry. Apart from being ...