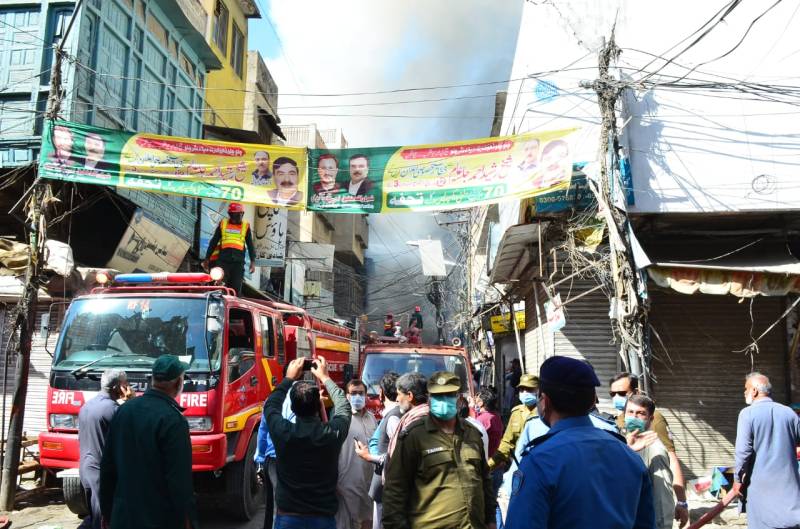 RAWALPINDI – A massive fire that broke out in Urdu Bazaar due to short circuit is yet to be doused, the city's deputy commissioner said on Thursday evening.

The flames engulfed multiple shops and buildings in the vicinity. Rescue and fire extinguishing efforts managed to bring the flames under control but the damages were great. However, there was no loss of life.

Numerous officials and Interior Minister Sheikh Rasheed visited the site and expressed satisfaction over the response of all agencies. The cooling process is underway however the are has been cordoned and public are prohibited from entering the bazzar.

3/3
Interior Minister expressed satisfaction over the response of all agencies and has instructed to use all available resources in putting down the fire. No loss of life has been reported and the situation is further monitored. pic.twitter.com/PnV9YjQUIr

Punjab Chief Minister Sardar Usman Buzdar has taken notice of fire incident, and has sought a report from the administration. The provincial chief-executive also directed the authorities concerned to hold investigation into the incident.

Last year a fire had broken out in Lahore’s Hafeez Center causing losses worth billions. The reason for the fire was also short circuit when a shop’s UPS malfunctioned. Hafeez Center is still being restored while businesses have been allowed to operate on floors that were restored.

LAHORE – Pakistanis are still in deep shock and agony following a massive fire at the Hafeez Centre, which not ...