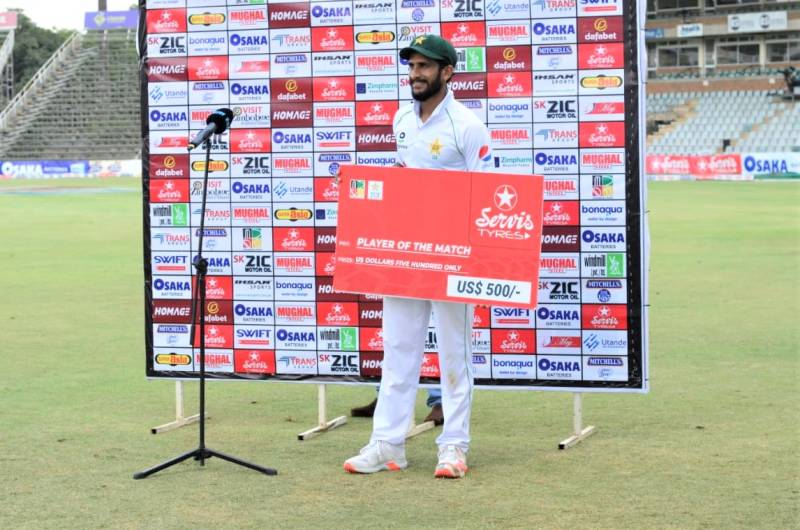 Seamer Hasan Ali has been declared player of the match in view of his superb performance in first Test match against Zimbabwe in Harare.

Hasan Ali followed his first innings figures of 4-53 with a career-best five for 36 in his 12th Test to earn the player of the match award.

His excellent reverse swing skills helped Pakistan to wrap up the first Test in Harare with more than two day’s spare.

The pacer in a tweet announced to dedicate his achievement to his newborn baby girl, Helena Hasan Ali.

“All praise is due to Allah almighty. Humble and grateful for all the messages and love. This one is for my little angel Helena Hassan Ali,” he tweeted.

“So proud of this wonderful team and efforts from all the boys, may Allah continue showering his Rahmat and may Pakistan prosper always Flag of Pakistan,” he wrote.

Two matches, two 'player of the match' awards for Hassan Ali on this tour 🔥❤️#ZIMvPAK pic.twitter.com/vXriKuebzi

50 wickets for Hassan Ali ❤ Insha_Allah many more to come pic.twitter.com/QtQcU1PeYf

HARARE - Pakistan have thrashed Zimbabwe by an innings and 116 runs in first Test in Harare on ...