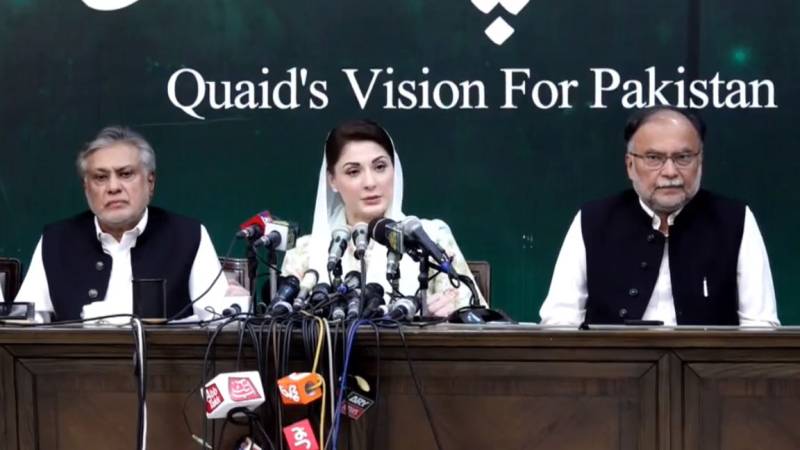 ISLAMABAD – The Pakistan Muslim League-Nawaz (PML-N) has expressed its resolve to take the issues of audio leaks and the US cipher to a logical end.

Addressing a press conference along with Maryam Nawaz and other PML-N leader on Saturday, Finance Minister Ishaq Dar said that ousted prime minister Imran Khan's divisive narrative was exposed in recent audio leaks. He said that allegations of conspiracy against the PTI government were baseless.

Dar said that Khan’s Principal Secretary Azam Khan had 'admitted' that he gave the US cypher to the PTI chairman; it is missing from the official records.

Terming the cypher a secret document and the property of Prime Minister’s Office, Dar said the PTI chief had committed 'a serious security breach by stealing the cypher'.

He said that minutes of a meeting presided over by Imran Khan on the cypher are present in the record but original cypher is missing. “It shows that conspiracy was hatched by no one else but Imran Khan himself,” he added.

PML-N Vice-President Maryam Nawaz suggested that a raid should be conducted at Bani Gala to recover the missing cypher from Imran Khan. She said the PTI was trying to build relations in the United States through a lobbying firm.

Calling Khan a traitor, Maryam said the PTI chief played with the country and targeted the martyrs of the Pakistan Army.