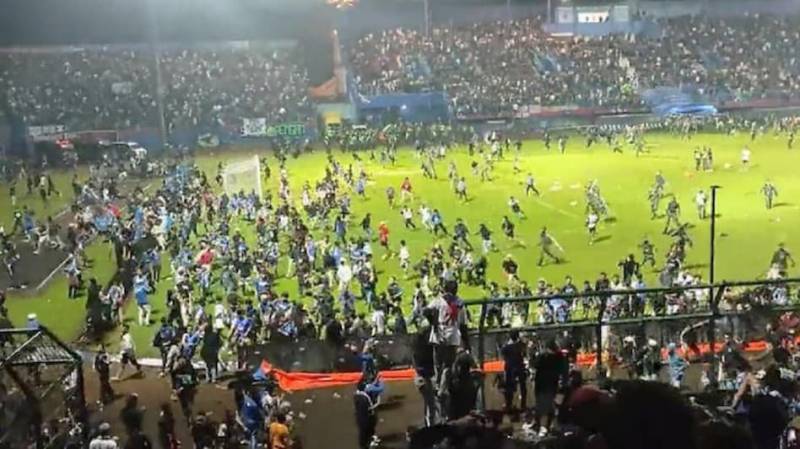 JAKARTA – The causalities, due to a soccer match riot that turned into a stampede, soared to 125 while hundreds suffered injuries amid violence, officials said Sunday.

Reports in international media show horrific visuals from the incident that occurred in the eastern city of Malang and the riots are said to be one of the deadliest sporting stadium disasters.

Riots erupted after the match ended with host Arema FC of East Java's Malang city losing to Persebaya of Surabaya 3-2.

Supporters of Arema then vented out their anger by throwing objects at players and soccer officials after which law enforcers fired tear gas to disperse rioters. It also triggered panic and a chaotic run as crowds run for the exit at Kanjuruhan stadium in Indonesia's East Java province.

Scores of fans, who came to watch their teams, suffocated amid mayhem while others were trampled to death. Two police officers also succumbed among others amid the stampede.

The rampage even spread outside the soccer stadium as mob torched police vehicles around the premises.

As the incident garnered global attention, Indonesian president Joko Widodo called for a high-level investigation into the incident and offered his condolences.

“I deeply regret this tragedy and I hope this is the last soccer tragedy in this country. Don’t let another human tragedy like this happen in the future,” he can be heard saying in televised clip.

As the government tried to calm the masses, experts claim that the stadium was filled beyond capacity. More than 40,000 tickets were sold while the arena is supposed to have 38,000 people at a time.

LAHORE – Afghanistan’s fans resorted to vandalism and attacked Pakistani spectators at the Sharjah ...

The Human rights commission in Southeast Asian nation also called for a probe including the use of teargas which was restricted by football world governing body FIFA.

Meanwhile, Football Association of Indonesia announced that matches of the top league have been suspended.