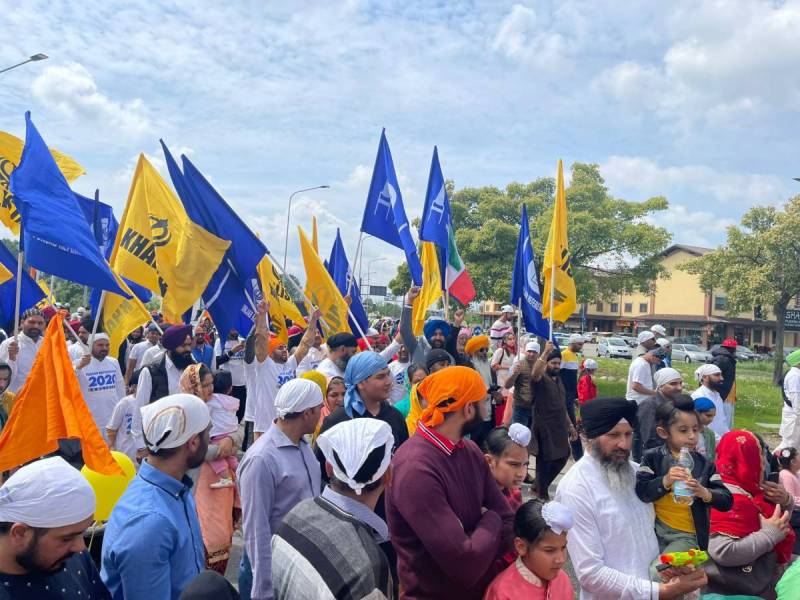 The walls of the Government office is also painted with slogans “Hindu-stan” Murdabad and “Punjab Hul Khalistan” with the Khalistan Referendum Voting Process starting from 26 January 2023 coinciding with India’s 74th Republic Day.

Calling upon the People of Pakistan to support Punjab Independence Referendum to welcome new neighbour Khalistan, the SFJ General Counsel Gurpatwant Singh Pannun in a video message stated that “Lines were drawn between Sikhs and Hindustan after June 1984 attack on Sri Darbar Sahib and over 100,000 Pro Khalistan Sikhs laid down their lives for Independence”.

Meanwhile, the timeline of various Khalistan referendums and the number of Sikhs who voted in favour of an independent Khalistan reflect that the demand of Sikhs for an Independent homeland in India is gradually being accepted globally.

According to an infographic released by Islamabad Policy Research Institute, the latest trends indicate increasing separatist sentiments, particularly amongst the Sikh diaspora.

More than 110,00 Sikhs in Brampton, Canada participated in the Khalistan referendum which was held in Canada two weeks ago.

In the referendum, organized by the pro-Khalistani and pro-separatist group Sikhs for Justice (SFJ), Sikhs demanded freedom from India and the establishment of an independent state of Khalistan.

Under the leadership of Sikh leader Gurpatwant Singh Pannu, Sikhs demanded their right in a peaceful and democratic way.

The Sikh community raised anti-India and pro-Khalistan slogans during the referendum. Moreover, more than 2,000 cars reportedly took part in the rally.

The campaign has raised awareness in the global community with regards to atrocities committed against Sikhs by India and it is believed it will further pressurize India to hold an official referendum.

During the press briefing to media outlets before the referendum, Pannu showed the Khalistan map with Shimla as its capital.

The Indian government urged its Canadian counterpart to act against the rising pro-Khalistani sentiment in Canada, which is home to over one million Sikhs but Canada has said it will not suppresses the right of its free citizens to do as they like.