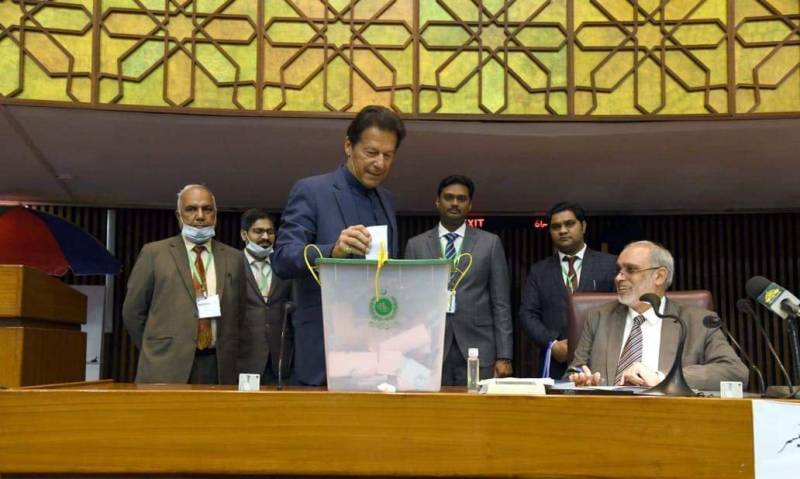 ISLAMABAD - The Election Commission of Pakistan (ECP) has rejected votes of three PTI leaders including Prime Minister Imran Khan in Senate polls due to additional marks on the ballot papers, it emerged on Wednesday.

Naveed Qamar, a senior leader of the Pakistan Peoples Party (PPP), claimed on Wednesday that the votes cast by the prime minister, Shehryar Afridi and Zartaj Gul Wazir have been rejected by the Commission. However, he did not provide the details why the votes were rejected.

However, a journalist, Waqar Satti, revealed details in a video that matter about the rejection of the premier’s vote was surfaced after State Minister for Climate Change Zartaj Gul told her party’s polling agent that she had signed the ballot paper following Imran Khan as he had also done the same. He said: "I also confirm the matter with Naveed Qamar and PTI's polling agent".

It is to mention here that the vote of Shehryar Afridi, the chairperson of the Kashmir Committee, also got wasted as he had also signed the ballot paper, in violation of the rules.

The Election Commission of Pakistan had also rejected his request to cast his vote again.

Gillani bagged 169 votes while Shaikh secured 164 votes out of total 340 cast by the National Assembly lawmakers.

He also thanked Maulana Fazlur Rehman, Nawaz Sharif and all PDM parties for the way they gave tought time to the government.

The PTI is yet to response to Naveed Qamar's claim about vote rejection.