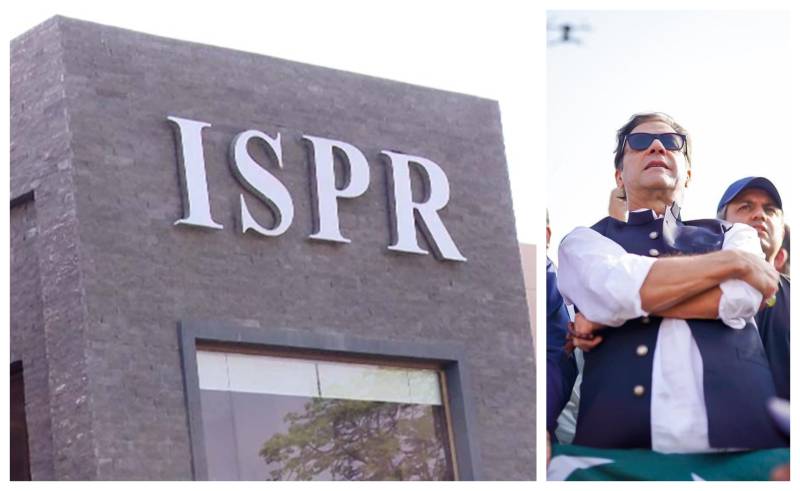 ISLAMABAD – Pakistani military media wing has rejected the allegations by PTI Chairman Imran Khan against the institution and particularly a senior army officer as baseless and irresponsible, terming it "absolutely unacceptable and uncalled for".

"Pakistan army prides itself for being an extremely professional and well disciplined organisation with a robust and highly effective internal accountability system applicable across the board for unlawful acts, if any, committed by uniformed personnel. However, if the honour, safety and prestige of its rank and file is being tarnished by vested interests through frivolous allegations, the institution will jealousy safeguard its officers and soldiers no matter what," the Inter Services Public Relations (ISPR) said in a statement late on Friday.

"The baseless allegations hurled at the institution/officials today are highly regrettable and strongly condemned. No one will be allowed to defame the institution or its soldiers with impunity.

"Keeping this in view, the  government of Pakistan has been requested to investigate the matter and initiate legal action against those responsible for defamation and false accusations against the institution and its officials without any evidence whatsoever," it added.

A day earlier, Imran was shot at and injured when a suspect, standing in front of the container carrying the PTI chief and senior party leaders, showered a volley of bullets with an automatic pistol when the party’s ‘Haqaaqi Azadi’ march reached Wazirabad’s Allahwala Chowk.

A PTI supporter, identified as Muazzam Nawaz, lost his life, while 14 party leaders and workers, including Senator Faisal Javed Khan, MNA Ahmad Nasir Chattha and Omer Mayar, were among the injured.

Khan was holding a press talk at the Shaukat Khanum Memorial Hospital in Lahore, a day after he was shot in the legs on Thursday as he waved to crowds from a truck-mounted container from which he was leading a protest march on the capital, Islamabad, to press for early elections and the resignation of PM Sharif.

Speaking about what he called a plot to kill him, Khan said: “Three people made the plan,” naming Sharif, Sanaullah and Nasser. I want to ask [army chief] General [Qamar Javed] Bajwa, will your honor rise or fall if you take action against people who inflict violence on people?”

“Hatred will grow,” Khan warned, if the three officials he had named were not held accountable.

“Until these three people resign, how will there be an investigation?”

He asked his party workers and followers to protest until the three people resigned.