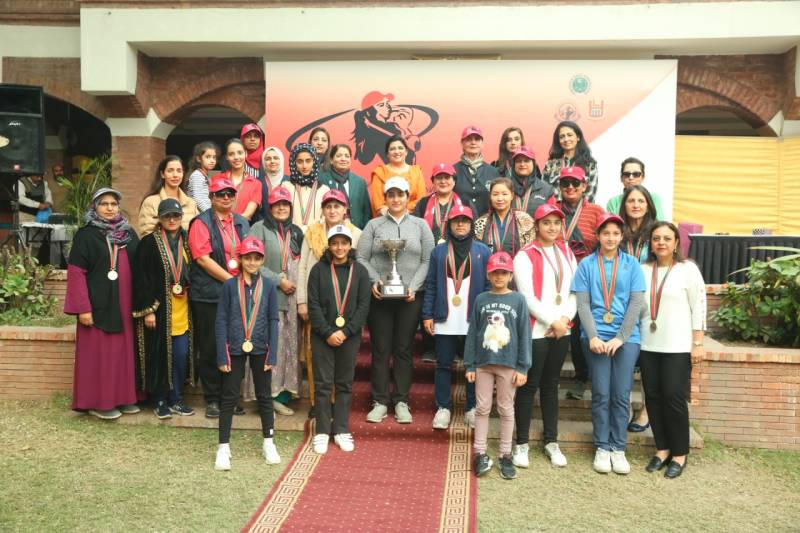 The planning and execution of this event was carried out entirely by women, under the personal supervision of Dr. Asma Afzal Shami, Chairperson Ladies Golf in Pakistan. However, its actual conduct was carried out by its dedicated Tournament Committee working under its Director, Mrs Maimoona Azam. The credit for conducting this Championship, strictly according to the Rules, must go to the Chief Referee, Mrs Munaza Shaheen. Incidentally, she is the first Pakistani Lady to have qualified as a Level One Referee from an International Golfing Institution.

A total of 50 lady golfers participated in this Tournament. As the golfers, were divided into three, handicap based, categories, Categories A, B and C, golfers with higher handicaps also had the opportunity to win a prize. In addition, a special category for junior girls under 14 years was also included, with the aim of “catching them young.” Maj Gen Shela Baqai, a serving lady Army officer, was the Chief Guest at the immaculately conducted Prize Distribution Ceremony.

Prize winners included Parkha Ijaz in Cat A with a gross score of 228, Suneya Osama with 245was second, while Bushra Fatima and Ghazala Yasmin tied with a score of 260. In Cat B, 1st Gross was Shabana Waheed, 2nd Gross Rubarb Haider and 3rd Gross Hussain Bano. Similarly Shazadi Gulfam won 1st Net, while Shaheen Irfan got 2nd Net and 3rd Net went to Uzma Khurshid. In Cat C, 1st Gross was won by Mina Zainab, while Rabia Tiwana was 2nd and Nasira Shaheen got 3rd Gross. In the Net Cat 1st Net was won by Rabia Rashid, while Aliha was 2nd and Saadia Asim won 3rd Net. In the Junior Girls Section 1st Prize went to Yasmin Khan, 2nd Prize to Aleesa Rashid, 3rd Prize to Nataliya Ch, 4th Prize to Uswa Siddique and the 5th Prize went to Manhal Ahsan.

It is worth mentioning that, till 2016, Ladies Golf was as low key as could be. But then, on Dr Shami’s request, President PGF instituted an annual, exclusive, Ladies Golf Championship, at the National level. Its outstanding success, enabled her to successfully petition thePGA to institute a similar event at the Punjab level in 2017. As the Federal, Sindh and KPK Golf Associations soon followed suit, there are now five exclusive Ladies Tournaments in the Annual Golf Calender. This has had a very healthy effect on the development of Ladies Golf. In the Punjab Open Golf Championship, held recently at Lahore, two young sisters, Parkha and Rimsha Ijaz, stunned Pakistan’s golfing community by fielding dream scores of 8 and 6 under par respectively over two days.

The PGA also deserves credit for establishing a mechanism for talent hunting at the grass roots level. In 2019, the PGA agreed to the joint request of Dr Shami and Mrs Maimoona Azam, to sanction an annual PGA Junior Girls Match for girls U-14. Whereas in the 1st event, 19 girls participated, this number increased to 35 in the 2nd Match. And then came a break of 2 years due to the Corona Pandemic. It, therefore, goes to the credit of Gen Aziz, the current President of PGA, for readily agreeing to revive this initiative. Consequently the 3rd PGA Junior Girls Golf Match was held last month in Lahore Garrison Greens, in which over 60 junior girls participated, i.e. an increase of 300% from the 1st Match. Incidentally, 13 years old Bushra Fatima, who was one of the original 19, today won the 3rd Gross Prize in Cat A. She has reduced her handicap from 36 to 9 in just one year. A euphoric Dr Shami now has her eyes set on sending a ladies team to the Paris Olympics.