Pakistan vs India: Arch-rivals battle at FIH Hockey5s ends in a draw 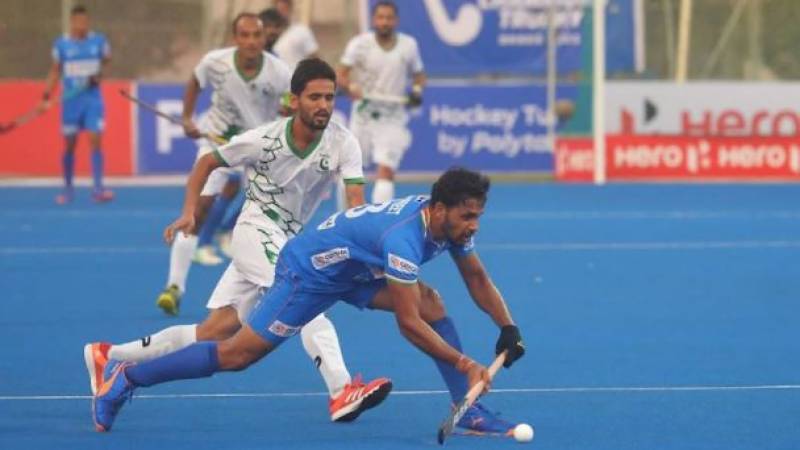 LAUSANNE – Team Green finished with a draw 2-2 against Men in Blue in a thrilling clash and stunned Poland 4-2 in their first game of the International Hockey Federation (FIH) Hockey5s competition.

Indian player Mohammad Raheel netted the ball in the very first minute of the high-voltage game and continued the momentum until Pakistan’s Liaquat Arshad hit the goal in the 7th minute. The first quarter tied at 1-1.

India again took the lead in the second quarter as Gursahibjit Singh scored a field goal deceiving the Pakistani side.

Men in Green continued attempts which were countered by the Indian side. Pakistan’s Abdul Rehman then levelled the match 2-2 ahead of the end of the second quarter.

Both sides displayed their A-game resisting each other to score any goal in the third and the fourth quarter of the match.

Before the Pakistani team drew against arch-rival India, they crushed Poland 4-2. Men in Green grabbed an early lead as Murtaza Muhammad scored a fantastic field goal in the third minute to put his side ahead.

Poland’s Rutkowski Wojciech then scored an equalizer to tie the score 1-1. Pakistan’s Abuzar then netted the ball thrice in the sixth, 12th, and 14th minutes to widen the gap between the two teams.

JAKARTA – Rana Abdul Waheed and Selvam Karthi scored a goal each as arch-rivals nations settled for a draw in the ...

Pakistan will be playing two matches against Switzerland and Malaysia. The final of the event will also be played at the close of the round-robin stage.

JAKARTA – Green Shirts’ hopes to play in Hockey World Cup were dashed after they suffered a big blow at the ...