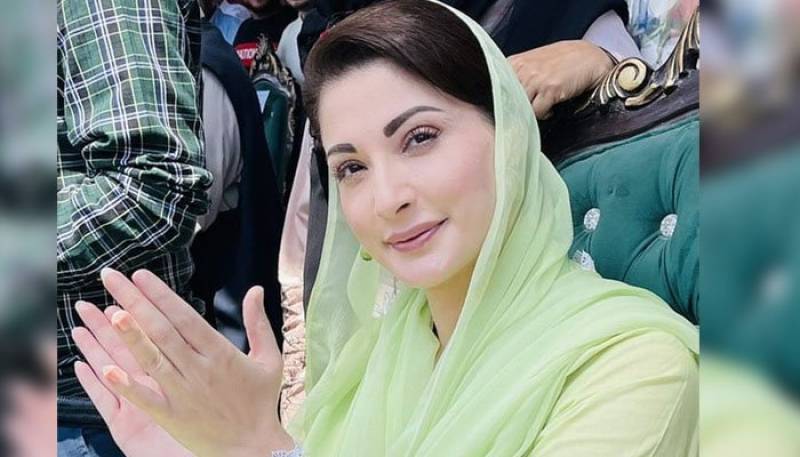 Maryam has accused the incumbent ISI chief, who was DG of ISI's counter-intelligence wing at that time, of orchestrating the ruling against her.

Judge Mohammad Bashir of an accountability court had on July 6, 2018 convicted former prime minister Nawaz Sharif, his daughter Maryam Nawaz and her husband Captain (retd) Mohammad Safdar in the same case for holding assets beyond known sources of income.

The court had also sentenced them to jail for different timeperiods. The convicts later moved the IHC against the conviction. The high court not only suspended the NAB court’s ruling but also released them on bail.

Maryam said in her petition that she filed the application "in consequence of certain extremely relevant, simple and clear-cut facts, which have come to light after pronouncement of the judgement and sentence" in the case.

"These facts which even otherwise are quite well-known are being brought to the notice of this honourable court for enabling it to decide this matter expeditiously, justly, fairly and in accordance with law," reads the application.

In a tweet later, the PML-N leader said the media "for reasons known to everyone" had not shet light on the “core subject” of her petition submitted to the IHC.

"The summary of which is that the case/verdict against me was pre-planned, orchestrated and influenced by Maj Gen Faiz Hameed, the then DG [counter-intelligence]," she claimed, referring to the incumbent Inter-Services Intelligence (ISI) chief.

AS ALSO AND SIGNIFICANTLY REVEALED by Justice Shaukat Aziz Siddiqui who has exposed the manner in which law,principles of justice & fair-play were not only violated but made a mockery of making this case a classic example of how political victimisation in Pak is carried out 2/3 https://t.co/quZzJrZl5c

Maryam, who is active in politics after her father was dismissed by the court on corruption allegations, also gave a reference to the speech made by former IHC judge Shaukat Aziz Siddiqui at the District Bar Association, Rawalpindi in July 21, 2018, wherein he had accused the top spy agency of influencing the judicial matters.

Referring to Justice Siddiqui’s speech at the Rawalpindi Tax Bar Association, she said:  “It was further alleged in the Speech that the said individual approached the then Chief Justice of the Islamabad High Court and that he declared that he would not let Applicant and her father from prison”.

She added that the then DG-C of the ISI knew in advance that PML-N leaders will be awarded sentences in the graft case.

Maryam said the statement of the former Justice Siddiqui “makes apparent that the then Major General Faiz Hameed met the former on 29.06.2018, a few days prior to the pronouncement of the Judgement and sentence dated 06.07.2018; and was emphatically certain of the fact that Mian Muhammad Nawaz Sharif and his family would be convicted in the Avenfield trial and made an attempt to influence the decisions of any potential appeals".

She said the decision rendered in the Avenfield reference was a “clear mockery and travesty of justice. Hence the conviction of the applicant is liable to be set aside”.

Maryam Nawaz also cited a Supreme Court decision in PML-N leader Saad Rafique case filed by the National Accountability Bureau (NAB). In the ruling, the apex court had remarked that NAB was being employed as a tool for oppression and victimization of political opponents by those in power.

ISLAMABAD – As around 700 Pakistanis, including cabinet members, are named in hiding financial secrets via ...