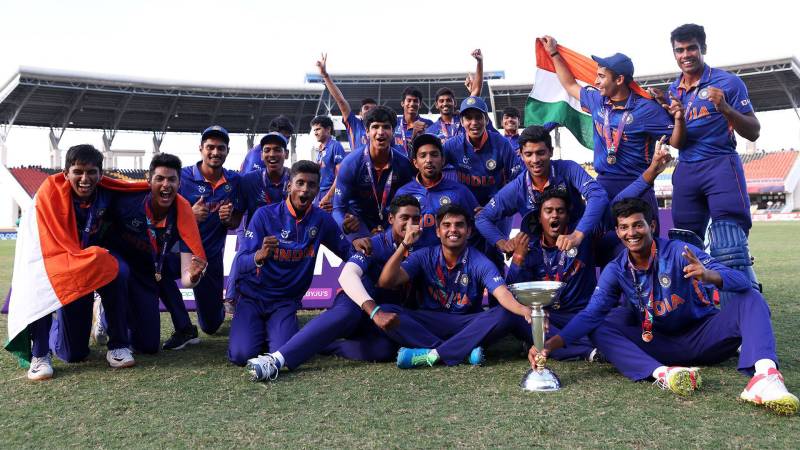 ANTIGUA – England failed to win the Under-19 World Cup for the first time in nearly 24 years as they slipped to a four-wicket defeat to Boys in Blue at the Sir Vivian Richards Stadium on Saturday.

Indian team lifted their fifth ICC U19 World Cup title in the final as the English team was all out for 189 in 44.5 overs.

Pacer Raj Bawa ended the ICC U19 World Cup as one of the leading players at the tournament and Player of the Match in the final itself. He claimed 5-31 while Ravi Kumar finished with 4-34.

A fantastic performance by #BoysInBlue as they beat England U19 by 4⃣ wickets in the Final! 🙌 🙌 #INDvENG

Opting to bat first, England faced a setback as Ravi Kumar picked two wickets in the first four overs. George Thomas and James Rew tried to get the partnership going but Raj Bawa dismissed the opener as India took control over the game.

England kept losing wickets at regular intervals and was soon found reeling at 61-6 in the 17th over. Rew failed to hit a ton as Indian seamers Raj Bawa (5-31) and Ravi Kumar (4-34) picked up nine wickets combined.

Tom led side crumbled in the first half of the innings and later James Rew's knock helped them to reach a score of more than the 180-run mark.

Pakistan on Wednesday registered an impressive eight-wicket win over Canada in warm-up fixtures of the 2022 ICC U19 ...

Chasing 190, India got off to a poor start as Boyden dismissed Angkrish Raghuvanshi on a duck on the third ball of the innings. Harnoor Singh and Shaik Rasheed then got together at the crease and the duo put on 49 runs for the second wicket.

India lost their sixth wicket in the 47th over with 14 runs required but clinched victory in the 48th over. Indian Skipper joined Rasheed and the duo stitched together a partnership of 46 runs.