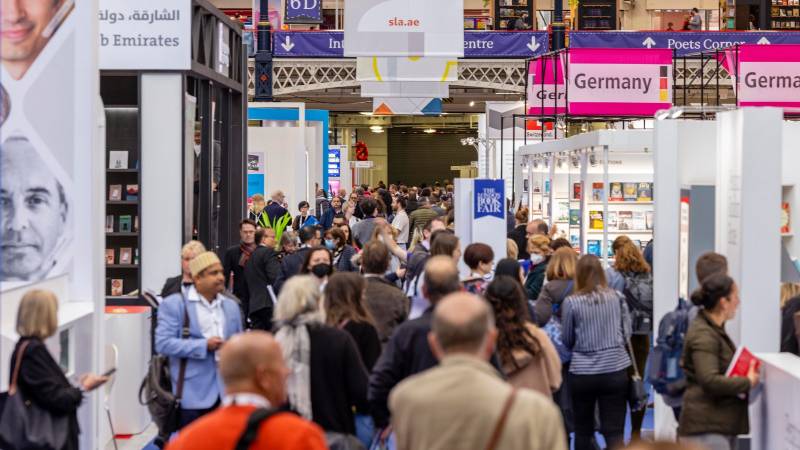 LONDON – Illustration, sustainability, and the legacy of the pandemic on publishing have been among the key themes discussed as attendees and exhibitors return to Olympia for day two of the London Book Fair 2022.

Nielsen Book Data revealed their research on reading trends during the pandemic, with fiction, and cosy crime in particular, on the rise, and this was reflected by the appearance of a number of crime and thriller writers in the day’s seminar programme.

Day 2 at #LBF22 was full of learning, inspiring talks and celebrating the best of our industry! Here’s some of the highlights… pic.twitter.com/zahU47bMOc

Popular crime fiction authors Ross and JD Kirk also appeared on the Author HQ stage to talk about their writing journeys with Kindle Direct and their advice for aspiring writers.

LIVE from #LBF22: It was great to catch up with Matt Trinetti and Parul Bavishi from @WritersSalon at this week’s #WritersSummit22. Key takeaway - “There’s no one path that a writer takes” - Do you agree with Matt? pic.twitter.com/jmVWg0zp1u

Andy Ventris, Director of The London Book Fair, said: “If the first day of this year’s London Book Fair was defined by a sense of excitement, today has provided a feeling of familiarity and connection. It has been brilliant to walk the halls of Olympia seeing exhibitors and attendees spot old connections and share their latest stories. The purpose of LBF has always been to serve as a global hub for business, expertise and networking for the publishing industry, and it has been heartening to see that happening in person.

📖 LIVE from #LBF22: International Excellence Awards 2022 🥂: The Rights Professional Award, sponsored by @SharjahBookAuth - goes to @PontasAgency “This year I’m celebrating 30 years in business…this Award is for my younger self” Congratulations Anna! pic.twitter.com/7UnsHwg5jH

“Our phenomenal seminar programme has also continued to engage and impress, including a gripping keynote by Ben Okri on the role of art in times of crisis, an illustration showcase from Diane Ewen, Killed Covers and more at our Illustrators Afternoon, and enlightening sessions on sustainable publishing. Nielsen BookData’s talk on sales trends since the last LBF showed that fiction is on the rise, crime titles remain as popular as ever, and print is persevering even in a digital age, and we are proud to have a programme that reflects these trends, tackling the most important issues facing the industry today.”

Booker Prize-winning novelist and poet Ben Okri delivered today’s keynote session, appearing in conversation with journalist and editor Sarah Shaffi to discuss the role of art in times of crisis.

Market Focus Sharjah Author of the Day Afra Atiq appeared in conversation with poet, playwright and author Joelle Taylor discussing her work as an Emirati poet, spoken word artist, and PhD candidate. Afra also spoke with Dubai Abulhoul at an event at the Sharjah Book Authority Pavilion where the pair discussed the impact Emirati female writers are having on the country’s literary scene.

The popular Illustrators’ Afternoon returned to Olympia with a bang this year, with Illustrator of the Fair Diane Ewen speaking to Macmillan Children’s Books’ Chris Inns about her career, what she hopes to communicate through her illustrations and the importance of representation in children’s books. The afternoon continued within the Association of Illustrators masterclass and the return of the creatives behind the killed Covers 2019 event, which this year took the form of The Cover Design Wheel of Fortune.

LBF’s Sustainability Afternoon saw panels discussing the challenges and possibilities of green publishing, with representatives from The UN, International Publishers Association, The Lancet, Elsevier, Publishers Association UK and Taylor & Francis sharing how publishers can do more to make the book world more sustainable.

Nielsen Book Data held a popular session reviewing books sales and trends since the pandemic, with key themes including the resurgence of print sales, the popularity of manga and cosy crime, and the return of the bestselling celebrity memoir.

Emily Rose Clifton, Scott Hulme and K Bailey Obazee were announced as the winners of the innovative New Futures Programme, each receiving funding to open a bookshop, white jacaranda Books was highly commended. The ground-breaking new initiative from Bookshop.org and The Booksellers Association promotes the opening of new independent bookshops from underrepresented communities across the UK.

We’ve had a fantastic two days welcoming back the publishing industry. Highlights include fascinating talks from Authors (and Illustrator) of the Fair Maggie O’Farrell, @a_afra and @creative_dy, our Market Focus Sharjah, and an array of award ceremonies. Now for day three! #LBF22 pic.twitter.com/6sGReuOCTB

Andrei Kurkov, President of PEN Ukraine spoke to Monocle’s Georgina Godwin about dialogues on war, in relation to the ongoing Russia-Ukraine. Award-winning author Pajtim Stavoci also appeared, discussing love, war and migration on the eve of the publication of his new novel Bella.