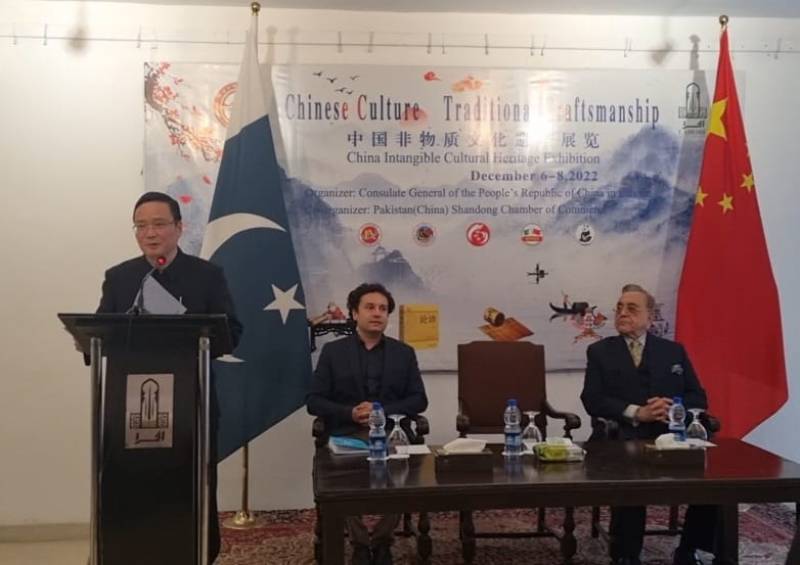 First of its kind exhibition that started on 6th December will culminate on 8th December in Lahore has been adorned with theme of “Chinese Culture & Traditional Craftsmanship” being organized under the auspices of Chinese Consulate Lahore.

On the occasion, Chinese Consul General Lahore Zhao Shiren said “the exhibition is a head-start to engender deeper cultural harmony among people of Pakistan and China because more we are integrated knowing each other’s heritage, craftmanship, culture as well as intangible intellectual wealth, more we will be doing better in lockstep”. In order to consolidate such cultural bond between Pakistan and China, consulate will continue to hold such thematic exhibitions with more improved versions in the days to come, he added.

“Exhibition is a heat-felt effort to offer a peep-hole window allowing people of Lahore about essence of Chinese intangible heritage spanning over thousands of years that consists of non-physical intellectual wealth relating to beliefs, traditions, customs,” he said.

“Fourteen centuries ago, China and Pakistan (then the sub-Continent) were linked up through the ancient Silk Road. Xuan Zang, an eminent monk of the Tang Dynasty, was the first Chinese visiting Lahore in 630 AD. Dhamarajika Stupa & Monastery, Taxila, where he stayed preaching for 2 years, still has the relics and remains there. A thousand years later, China and Pakistan have become all-weather strategic partners, demonstrating a deeply-rooted history and an iron-clad friendship. With the implementation of the Belt and Road Initiative, and especially the construction of the China-Pakistan Economic Corridor, our two countries support each other and forge ahead, having achieved fruitful results in investment and trade cooperation, strengthened cultural exchanges and promoted brotherly bonds,” he explained.

“Lahore, known as a city of rich culture and heritage in Pakistan, also enjoys the fame of the City of the Art, in addition to the City of Gardens. It is a charming city with a long history and profound cultural heritage. As the former capital of the Mughal Dynasty, Lahore is also acclaimed as the "Heart and Soul of Pakistan".

Since I took office in May, I have visited many historical sites such as the Lahore Fort, Badshahi Mosque, Shalimar Garden and the Lahore Museum.

Half a month ago, the Chinese diplomats were also invited to attend the International Islamic Art Festival 2022 at this same venue. These events enabled us appreciate more the richness and diversity of the Pakistani culture, and by doing this exhibition, we want to reciprocate, to facilitate the local people to appreciate the Chinese culture, in further cementing cultural interaction and the people-to-people exchanges,” he added.

“Cultures are diversified, and civilizations are different. But they are, by nature, not for conflicts, nor are they confrontational. The ultimate goal for cultures and civilizations is for dialogue, tolerance, peaceful coexistence, harmony, and shared growth. Diversity spurs interaction among civilizations, which in turn promotes mutual learning and mutual understanding. I hope this exhibition will rightly serve the purpose in consolidating our traditional friendship, and further enhancing the bilateral cooperation and partnership,” he expressed.