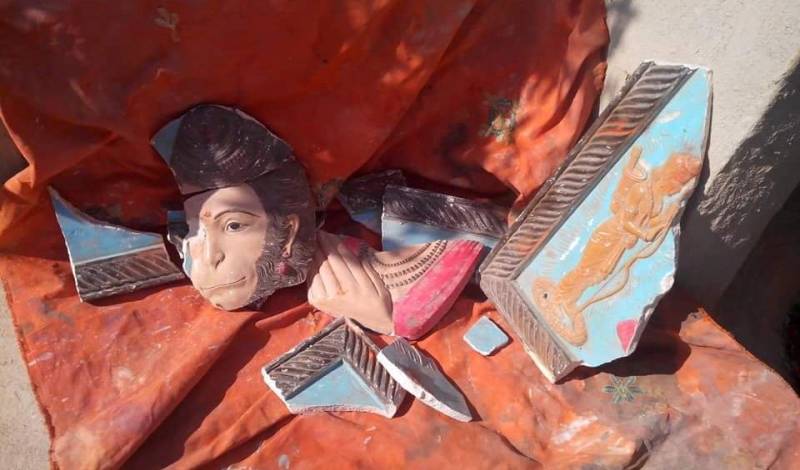 MIRPURKHAS - A Hindu temple was reportedly desecrated in Mirpurkhas, provoking a strong protest by members of the Hindu community here.

According to posts shared on social media, idols of Hindu deities in the temple of Hanuman were broken by unknown accused persons during the attack.

The act, which reportedly happened on the eve of Holi, has been condemned by people on social media, demanding the arrest of suspects.

Some reports suggest the act surfaced after blasphemy allegations led to violent protests against Hindu community in the city.

A post shared by Fixit Mirpurkhas says (sic), "I Strongly Condemn over Today's Blasphemy Act In Mirpurkhas. Arrest All Those culprits who Wroted DownName of ALLAH And MUHAMMAD (صلی) On Road, Such a Shamefull Act! We Demand Pure Action On It".

Lal Malhi, a senior Pakistani Hindu leader from Pakistan Tehreek-e-Insaf, also confirmed that temples were attacked in Mirpukhas. He added, "Thanks to Pakistan Rangers who ensured no major harm made to temples".

Temples attacked in Mirpurkhas. Thanks to Pakistan rangers who ensured no major harm made to temples. @ArifAlvi @RiazSangi