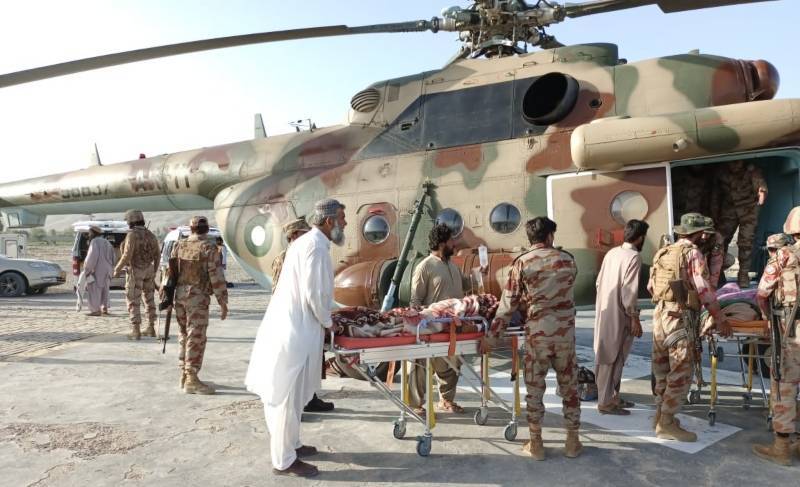 RAWALPINDI – Pakistan Army helicopters and troops were currently involved in relief and rescue activities in the quake-affected regions of Balochistan, the military’s media wing said Thursday.

A statement issued by the Inter-Services Public Relations cited that Pakistan Army troops have arrived in the remote mountainous city of Harnai for rescue and relief operation after a 5.9 magnitude quake that struck at a shallow depth of 9km struck the southwestern region of the country in the wee hours of Thursday (today).

Basic shelter and food items have been transported to affected areas, while doctors and paramedics are also assisting the civil administration in providing medical care.

Around nine critically injured citizens have been evacuated to the provincial capital via Pakistan Army aviation helicopters. FC Balochistan (North) IG has also rushed Harnai for damage assessment and response.

An urban search and rescue team is on its way to the affected areas to fasten the rescue activities, it said.

At least 20 people have been killed while authorities claim that the death toll may increase and that many people died when structures collapsed. The dead were women and children, per reports.

QUETTA – A 5.9 magnitude strong earthquake has killed at least 20 people and injured more than 300 others in ...

More than 100 houses made of mud were crushed and a number of buildings were damaged, leaving hundreds of people homeless. Much of the damage appears to have affected the Harnai district which is located east of Quetta. The area has a large number of coal mines that could collapse during quakes.