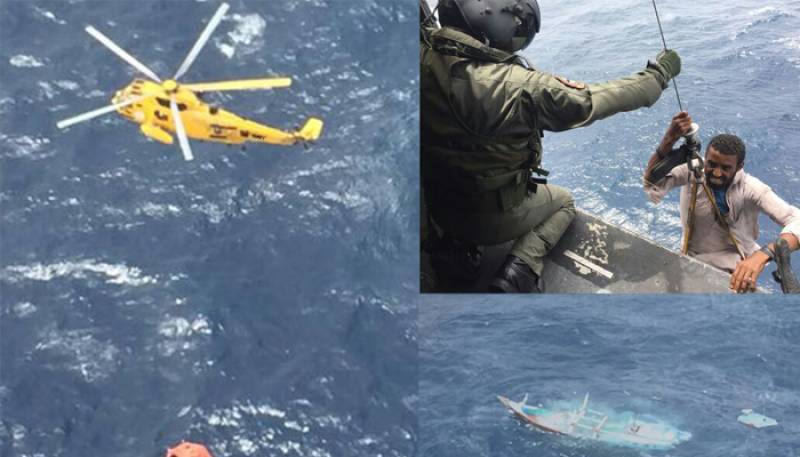 After receiving information about a distressed dhow bearing the flag of Islamic Republic of Iran with 11 crew members (fishermen) onboard, the Navy promptly responded and launched a search and rescue operation.

Helicopters equipped with search and rescue gear along with para medical staff swiftly reached deep sea area on the South West of Karachi in the shortest possible time and conducted an aerial search for the fishing boat. After search efforts and low visibility conditions at rough sea, survivors were located by the aircrew.

The operation was amicably augmented by Pakistan Navy Ship NASR, which was already present on routine patrol.

In a very short span of time, the 11 survivors were recovered and first aid was rendered. The survivors thanked Pakistan Navy for the hour and a half long rescue operation after arriving at the Naval Air Base at Karachi.

Finally, the salvaged Iranian crew was handed over to HQ Pakistan Maritime Security Agency for further handling of the survivors as per the provisions of law.

Pakistan’s naval forces have an inherent capability of flexibility and reach which have been clearly manifested/employed during this rescue operation at open sea, the Navy said in a statement. “Our ships, flying the green flag around the globe are reflection of our national character, resilience and unrelenting commitment to the humanitarian cause.”