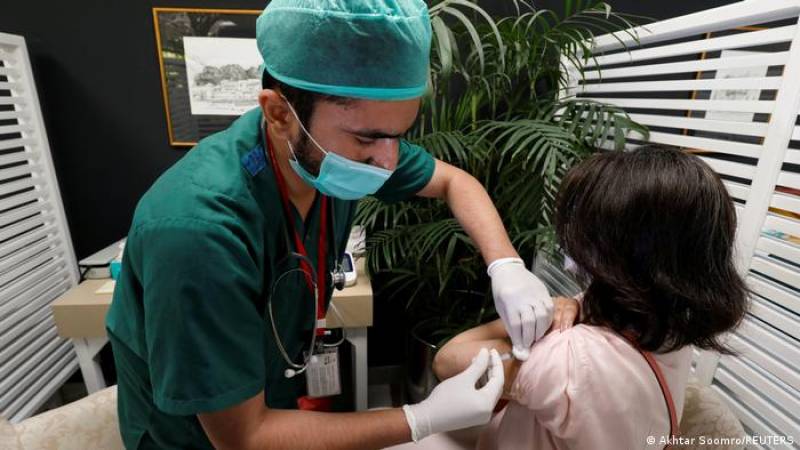 ISLAMABAD – The vaccine rollout in Pakistan continued at a rapid pace as over 10 million Covid doses have been given across Pakistan as of June 09, National Command and Operation Centre (NCOC) chief Asad Umar announced Wednesday.

Speaking in a national presser to mark the achievement, the PTI minister said the government's strategy to curb Covid spread during the third wave of the pandemic is effective.

The federal minister also took to his official Twitter, where he wrote that the tally of vaccine doses administered thus far in the country will cross ten million today.

Thankfully, people are signing up for covid-19 vaccination and getting inoculated in large numbers, he said, appealing to the people who have not yet got themselves vaccinated to receive a Covid-19 jab at the earliest.

NCOC, the country’s nerve center on Covid, also shared a tweet that stated that as many as 335,790 people were vaccinated across Pakistan on June 8, taking the total number of doses administered till now to 9,895,700.

ISLAMABAD – Pakistan registered a dip in the third of the Covid pandemic with 1,118 new infections and 77 ...

Meanwhile, Pakistan on Wednesday reported the lowest number of Covid cases since February 22 after 1,118 people tested positive for Covid-19 during the last 24 hours.

The country's Covid-19 positivity ratio continued to stay below 3% for the second straight day, standing at 2.54%.

Pakistan has continued to witness a decline in the cases since it imposed restrictions, and has been making efforts to vaccinate a large number of people.