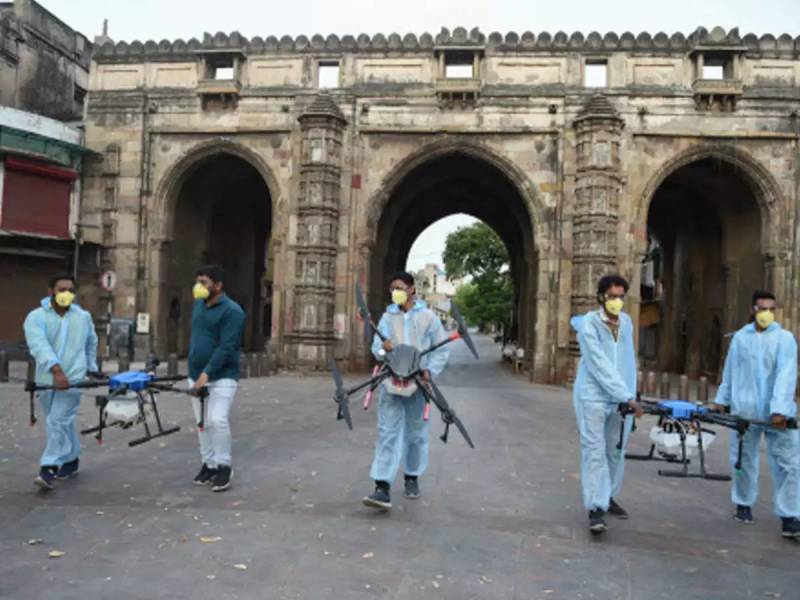 AHMEDABAD – Drones hovered over the pandemic-stricken Indian city of Ahmedabad on Saturday spraying disinfectant on the streets, hours after security forces clashed with residents who flouted a toughened lockdown.

The western city of 5.5 million people has become a major concern for authorities as they battle a surge in coronavirus deaths and cases across India.

Ahmedabad accounts for 343 of the almost 2,000 deaths reported nationwide and just under ten percent of cases registered. Other cities in Gujarat state have also been badly hit.

Drones sprayed from the air while fire engines and other city vehicles toured the empty streets sending out clouds of cleaning agent onto roads and the outside of buildings.

"We have started a massive exercise to spray disinfectant in all zones of the city," said the city's acting chief administrator Rajiv Gupta.

India has been in the grip of the world's biggest lockdown since March 25, which was made stricter in Ahmedabad on Friday because of the accelerated spread of the virus.

Hundreds of paramilitaries kept people off the streets and virtually all stores have been closed for at least a week.

On Friday night, security forces fired tear gas at stone-throwing residents who ventured out. At least 15 people were arrested and the police presence was stepped up Saturday.

Authorities have insisted the pandemic crisis is under control and have started to ease restrictions in many parts of India to let agriculture and some companies get back to work. Experts however have warned of an increasing toll despite the lockdown.

The virus is spreading particularly quickly in major cities such as Mumbai, New Delhi and Ahmedabad. And experts say the toll numbers are higher than reported because of the lack of testing and poor accounting for deaths.

While the number of deaths is low compared to the United States and the worst-hit European nations, health specialists say India's pandemic curve may only peak in June and July.

Shamika Ravi, an economic advisor to the government who has become a much-followed commentator on the pandemic's spread, said Saturday that the "infection is way ahead of our knowledge" in Gujarat and Maharashtra, which includes Mumbai, because there is not enough testing.

The number of confirmed cases of the novel coronavirus disease (COVID-19) in India has risen by over 3,300 over the past 24 hours (3,390 yesterday) to 59,662, according to the country's Ministry of Health and Family Welfare.

As many as 1,308 COVID-19 patients in India have recovered over the same period of time (1,273 yesterday), bringing the total number of cured people to 17,846, the ministry added.

A total of 39,834 COVID-19 patients are currently receiving treatment in the country.

The central state of Maharashtra remains the most affected one, with 19,063 cases, followed by the western state of Gujarat with 7,402 cases, and the National Capital Territory of Delhi with 6,318 cases.